A fire at the Cattle Market in November wrecked four buildings and damaged several more. But it could have been worse. We went down to see what Notts would be missing if the whole thing had gone up..

The blaze at the Cattle Market was so intense, and the flames so high, that looking out of the skylight in my flat on Forest Road, a hazy orange aurora hung behind the city centre, casting Nottingham in a strange, ominous backlight.

If it hadn’t been for the direction of the wind, and the rapid response from the emergency services, we might well be ruminating on what we lost the night the Cattle Market burned down.

The feelings would probably range from mournful loss of a beloved Nottingham institution, to a lingering regret at not visiting more often, as was the reaction of a student I spoke to a few days after the fire: “Uhh, what’s the Cattle Market?”

For those who don’t know, the Cattle Market is a ragbag of a bazaar just outside the city, in the shadow of the Meadow Lane Stadium. It’s home to one of the most serious live auction houses in the country, an open-stall market selling pretty much anything you can get in the high street but cheaper, a flea market, and a rackety open-air thrift store. You can walk out with a quid’s worth of biscuits past their sell-by date, or £30,000 worth of 200-year-old mahogany furniture.

Or nothing. You can just traipse around the stalls, among a miscellany of trestle tables weighed down by box-loads of cheap makeup and shampoo, Fray Bentos pies, kitchen towels, high-vis vests, lighters, rolls of bin-liners, racks of vintage clothing, mops, lamb chops, lollipops, hacksaws, spanners, shovels and spades.

You could walk straight through all that and go into one of the five salerooms of Arthur Johnson Auctioneers, which managing director Phil Poyser describes as a “treasure hunter’s playground.” Antique, hand-crafted furniture, vintage objets and rare, eccentric collectables go under the hammer, alongside contemporary and ex-catalogue furnishings, machinery, hardware and electronics.

You might have guessed that the Cattle Market was once used to sell livestock. Animal trading began back in 1886, and for the best part of a century it was one of the best places to get live cattle and sheep anywhere in the county.

As trade increased, so did the market: numerous buildings, cattle and sheep pens, a weigh house, a slaughterhouse, auction rings, warehouses, offices, and even a branch of Lloyds Bank settled in. In the days when a railway line ran down the edge, special sidings were constructed to load the animals straight onto railway carriages to take them on to their next stop.

After the Second World War, when the surrounding roads became increasingly clogged with traffic and the logistics of getting thousands of animals to and from the market made things less practical, trade in livestock started declining in a big way. Eventually, in 1993, the hammer came down on the last cattle ever to be sold there.

The fire could have been much worse, but it scarred the market physically and left painful memories. For some, the market isn’t just a business place, but a way of life.

When I went to see Phil Poyser in December, it was a cold, Wednesday afternoon and the place was largely deserted, as it always is midweek. You could still see the charred, mangled ruins the fire had left behind. He told me that if the November fire had been worse, Nottingham would have lost “a one-off part of Nottingham’s heritage”.

“There’s a massive buzz about the place with the auctions going on and the stalls trading outside,” says Phil. “You get people spending £10,000 on furniture, then going to the butcher’s van to buy their Sunday joint. It’s a proper community. You get some people who come every week not just to buy things, but for the atmosphere.”

If this were another city, the market might have gone down the nouveau-artisan road. Borough Market used to be where London’s greengrocers bought their stock wholesale. Today, it’s the exclusive realm of yuppie organic cheesemakers from the Cotswolds and mushroom-inoculated wood-thinnings vendors. Working-class farmers and traders don’t get a look in.

The Cattle Market isn’t threatened by this. And long may that last. But Phil tells me he’s not against a bit of new blood, a bit more thrift-shop chic and maybe even the odd startup baker, looking to the Cattle Market in the future. “Younger people are missing out on this at the moment,” he says. “It’s a fantastic way to start a business. The risks are very low.”

In November, four buildings were destroyed, and nine others were damaged. The fire could have been much worse, but it scarred the market physically and left painful memories. For some, the market isn’t just a business place, but a way of life. Stuart Collins has been coming to the market for forty years. He’s not just a visitor, he’s part of the community that revolves around this unique space.

“It’s a great set-up,” he says. “There’s a really friendly atmosphere, the people all know each other. They arrive early and have a natter in the morning over their bacon sandwiches. There’s an understanding between them.”

With this comradery, the traders rallied round the people who were worst affected by the fire. Many of them were back in business the following Saturday market day, when 2,000 visitors – well above the usual turnout – showed up in solidarity.

One of the businesses most devastated by the fire was army surplus seller Anchor Supplies, which lost a whole warehouse and thousands of pounds’ worth of stock. Thankfully, fortune left them some space to trade from in the buildings rescued by the fire brigade.

When I went down there in December, there was a banner on the railings outside proudly proclaiming “Anchor Supplies, still going strong”. So is the Cattle Market, and Nottingham is much the better for it. 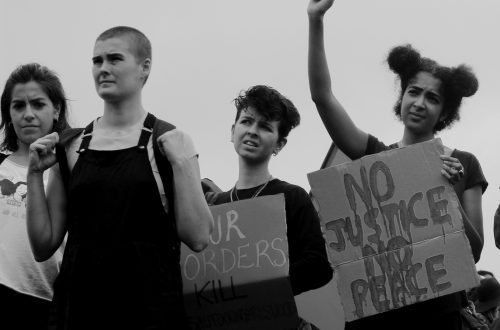