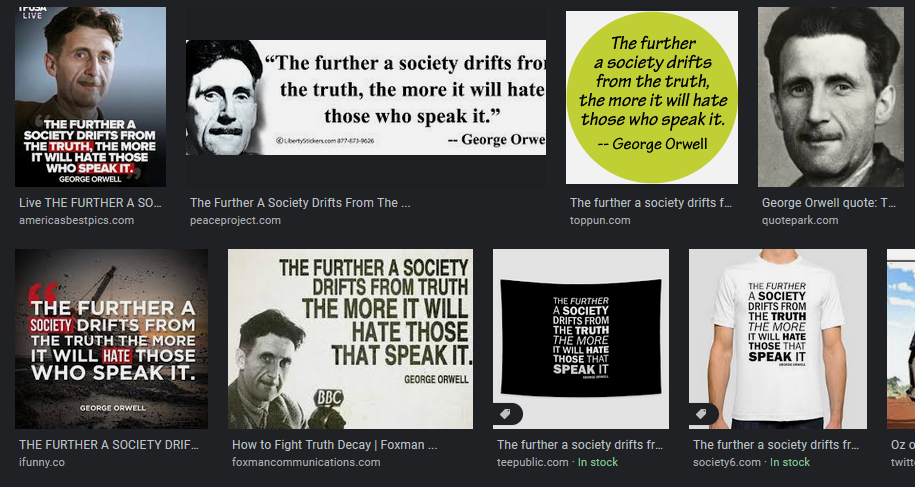 “The further a society drifts from the truth, the more it will hate those who speak it.”

This famous Orwell quote is ubiquitous: in the media, on placards at demos and rallies, and of course in meme form, repeated and shared on social media, millions of times over.

There’s just one problem: this isn’t an Orwell quote. The author of Nineteen Eighty-Four never wrote, said, or even noted this down. It was written in 2009.

Orwell is one of those writers who are well worth quoting.

Every day, in the press, on social media, and in TV talk shows, Orwell’s thoughts, words, and sharp observations are referenced, alluded to, and discussed.

But beware. Among the mass of Orwell quotes out there, particularly on social media, many are false, or misattributed, and have been shown to be numerous times.

As the publicity officer of The Orwell Society I am often asked by news and media outlets to confirm or deny the veracity of quotes attributed to Orwell.

I have worked with outlets including the Reuters Fact Check team, and Snopes, and LeadStories, and am available to check quotes or any other information relating to Orwell.

Below I have listed some of the most common false or disputed Orwell quotes out there, with explanations and, where possible, links to source material explaining how these have come to be associated with or misattributed to Orwell.

“In a time of universal deceit, telling the truth is a revolutionary act.”

Another quote widely attributed to Orwell and used by all sides of the political divide, in rallies, and online. The true source of the quote, (which in its original form is without the word ‘universal’), appears to be a book published in 1982, which includes the sentence “In a time of deceit, telling the truth is a revolutionary act.” But again, whatever its origin, this phrase does not appear in any of Orwell’s recorded writings or letters.

“A people that elect corrupt politicians, imposters, thieves and traitors are not victims, but accomplices.”

Cited by numerous political figures, journalists and commentaries as having been written by Orwell, this precise phrase does not appear in the Orwell library, or in any of Orwell’s correspondences, a fact confirmed by The Orwell Society, of which I am a trustee, to both Reuters and Snopes.

“The people will not revolt. They will not look up from their screens long enough to notice what’s happening.”

Though its connection to Orwell is stronger than others on this list, this is not a direct quote. It actually features in the 2014 stage adaptation of Nineteen Eighty-Four, written by Robert Icke, and Duncan MacMillan.

“Journalism is printing what someone else does not want printed; everything else is public relations.”

A common quote which many assume is by Orwell; it certainly sounds faintly Orwellian, at least to modern ears. The quote’s true origin isn’t clear. It may be based loosely around a phrase which itself appears in various similar iterations and also attributed to figures including newspaper magnate Alfred Harmsworth, whom we know as Viscount Northcliffe. However the fact is that the quote cannot be found in any of Orwell’s own works, or diaries, or correspondences.

“The further a society drifts from the truth, the more it will hate those who speak it.”

One of the most well-known of the spurious Orwell quotes. As we confirmed with the Reuters Fact Check team in December 2021, this has been repeatedly debunked as an Orwell quote; in fact its true source is known, and has been shown to be far more modern.

This is a short extract from a lengthy quote that appears at the end of filmmaker Michael Moore’s anti-Iraq War polemic Fahrenheit 9/11. Moore even introduces the dramatic finale by saying ‘George Orwell once wrote…’; but a closer examination shows that these lines only appear in the movie adaptation of Nineteen Eighty-Four, starring John Hurt and Richard Burton, and are paraphrased from the novel itself.

This quote appears to have been attributed to Orwell in the 1970s, and is frequently used today. Orwell expressed similar sentiments in much of his writing, however this phrase, in exactly this form, does not appear in the Orwell library.

“The people will believe what the media tells them they believe”

I will defer to the words of Dorian Lynskey, author of The Ministry of Truth, a ‘biography’ of Nineteen Eighty-Four. Lynskey tackled this quote, which first appeared during the US presidential election of 2016, as follows: “In fact, Orwell never wrote those words, nor do they sound like something he would have written. For one thing, “the media” did not enter common usage until after his death in 1950, and this stickler for correct prose would never have used the singular. For another, he had too much faith in ordinary people to portray them as gullible puppets. A report commissioned by the Senate Intelligence Committee later discerned that the phony quotation had been disseminated by the Internet Research Agency, Russia’s most prolific troll farm. People will believe what a Twitter meme tells them they believe.”

(I am constantly revising this page, so please get in touch with any potentially spurious quotes you notice online or in print, and I will be happy to investigate).