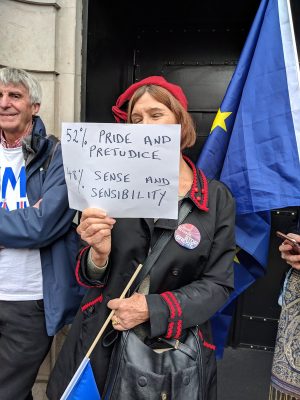 What used to be said, disdainfully, of Leave voters – ‘They were duped…they didn’t know what they were voting for.. things have changed etc.’ – has been reduced to a single sneer over the past few weeks: “Fuck’em” (that’s a direct quote).

But isn’t turning over the referendum going to destroy millions of people’s faith in democracy? “Fuck’em.”

Isn’t stopping Brexit a gift for the far-right? “Fuck’em. They shouldn’t have voted Leave.”

But aren’t these the people who are going to be most hurt by no-deal? “Fuck’em. Serves them right.”

The predominantly middle class liberal second referendum lobby has thrown everything, including a series of high-profile luvvies from Mariella Frostrup to Sir Patrick Stewart, into the 1000-day war on Wetherspoons ignorance, codename ‘Operation Fuck’em’.

It’s been a competition. Sport for educated middle class writers, academics, scientists, broadcasters, actors, musicians and smug comedians. To “demolish” Leave voters in their housing estates and white vans, with an unremitting barrage of scornful superiority.

LBC’s James O’Brien probably holds the title; after months of bellowing down Leave voters on air he actually managed to reduce one to a snivelling “You were right… I was wrong… I’m sorry… I’m so sorry” through uncontrollable tears. Stewart Lee’s contribution: “It wasn’t just racists who voted to leave Europe. Cunts did as well”.

And strangely, people aren’t being won over by this. The impertinent lot that they are.

So that now, with the gear switch from ‘Call a People’s Vote’ to ‘Revoke Article 50’, a malign truth underlaying Remain has been exposed. If they can’t stop Brexit, ultra-Remainers would be content, and contented, to see the 17.4 million punished with a painful no-deal, starting with the most precarious.

If a quarter of the energy that has gone into trying to overturn Brexit had been spent trying to find a way to make it work, for the sake of those most at risk if it doesn’t, we might not be facing a “catastrophic No-deal exit”, to quote an email from Another Europe is Possible – AKA the ‘People’s Vote’, now ‘Revoke Article 50’ campaign – last week.

We might have got a deal. A two year transition period with continued EU membership to sort out all of the horribly complicated snags would be under way, and the fears of business leaders who are “watching in horror” at the prospect of no-deal would have been proved unfounded.

Instead, at the dozens of opportunities to find compromise, on crucial issues over customs agreements, trade treaties, how to avoid catastrophe at the ports – the very things on which millions of people’s jobs will depend – the ultra-Remain response has only ever been: Just. Stop. Brexit.

No Norway +, no Canada option, no Switzerland model, no EEA, no EFTA. They’re all just far too undignified to even entertain. Just. Stop. Brexit.

Usually without a word about the implications for justice and democracy, nor the enormous charge of right-wing, Brexit-betrayal rage that could be unleashed. Second referendum supporting MPs already get regular death threats and hideous abuse from Leavers in the streets. If you think this is a hostile environment now – for Muslims, Eastern Europeans and MPs – just wait until we cancel Brexit.

What has only truly occurred to me in the last few weeks is that there are ultra-Remainers now who, privately or not, think that if Brexit can’t be stopped, the next best option is a no-deal catastrophe. Satisfaction or vindication. And if that means the poorest people pay the highest price, so be it. “Fuck’em”, in other words.

There is a hopeful assumption among some that at the last minute a deal will be reached and Armageddon avoided. Well that’s certainly not what the 1 million who marched through London on Saturday want to happen, nor the 5.8 million and rising who have signed the Revoke Article 50 petition.

If a deal is reached, that would mean no social media-friendly ‘We told you so’ moments: miles and miles of lorries clogging the roads into Calais and Dover; empty supermarket shelves and foodbanks run bare; desperate frenzies outside pharmacies when the monthly box of statins arrives; thousands of jobs lost in retail and logistics. And what a let down that would be.

Remainers have managed to equate all of this rhetorically with Brexit itself, not a no-deal Brexit. They have managed to persuade millions of people that the two are the same thing. So that now there are British people stockpiling food and supplies, all the while cursing the idea of doing the deal which would mean we don’t need to stockpile food and supplies.

If a deal doesn’t happen now, after so many opportunities, I’m blaming two main groups: the intractable hard-right Brexiteers and the intractable Remainers. And there is an important distinction. The first group, rightly or wrongly, thinks that Brexit is a good idea for the country and the people. The second group is convinced that it is a disastrous idea for the country and the people. And is determined to be proved right.

The bloody-minded mentality being: if it isn’t a disaster, how will people know that they were wrong? And anyway, it would serve them right to feel the pain of their error. Fuck’em.

These used to be taboo thoughts. Now you can just come out and say it.

Today is March 29th. A date ringed and underlined in red on the national collective consciousness, as the beginning of the departure. Leavers are already suspicious that an extension is simply extra time for the Revokers to get their way. From here on, with every day that passes, suspicion, impatience, and tension will simmer, maybe even sizzle over into street violence – towards MPs, migrants or mosques.

If this happens nobody can say they weren’t warned. Nobody can say there weren’t options. There is far too much at stake, for the people who Labour purports to stand for, to simply mutter “Fuck’em” and walk away now.