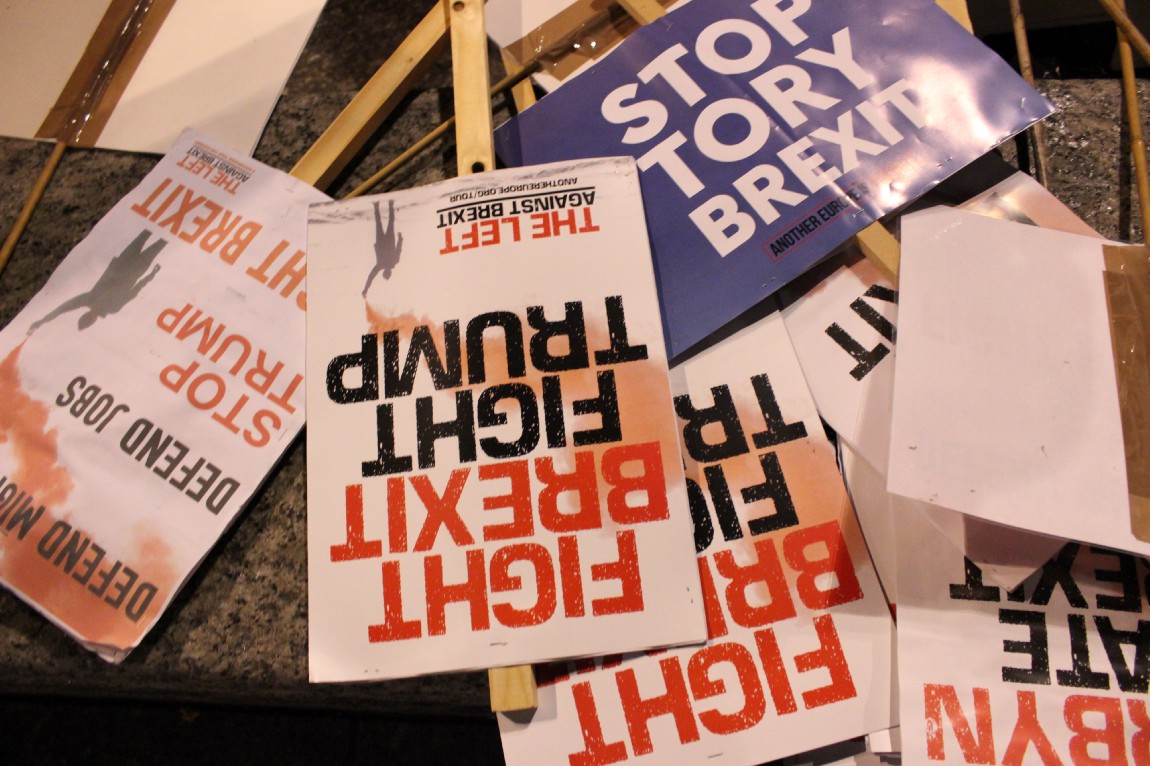 Ostensibly – and perhaps practically, if it comes to it – they don’t mean the same thing at all. But assuming, as the post-referendum Remain camp confidently does, that a re-run vote does lead to Brexit being overturned, what then?

Addled and vile as they are, the thugs caught on camera abusing Remain MP Anna Soubry outside Parliament in January might stand as a portentous answer; one of the first penetrating bursts from the fire raging beneath the ice on which the second referendum campaign is standing.

You could have called round a dozen casting agencies looking for someone to play ‘Enraged Leave voter’ at the last People’s Vote demo I was at – in Nottingham city centre last November – and not got a better fit than the man who crashed the party, bellowing “GET THE F***ING FOREIGN BASTARDS OUT!! WE VOTED BREXIT!!”

Useful idiots often invade political rallies. And this idiot was particularly useful. As the epitome of everything the post-referendum Remain campaign believes it is up against: nothing more than a hoard of mindless racists and square-jawed white van bigots, just like this awful man.

Later that week an email from Stand Up To Racism with the subject line “We did it!” landed in my inbox, declaring a street-presence victory of three to one over Tommy Robinson’s “racist crew” in London the previous weekend.

It continued: “Around 15,000 people turned out to oppose far-right groups assembling for what they claimed was a ‘Brexit betrayal’ march, but anti-racists view as an attempt to grow a violent far-right street movement targeting Muslims and migrants.”

In his essay Inside the Whale, George Orwell wrote that “so much of left-wing thought is a kind of playing with fire by people who don’t even know that fire is hot.”

It’s difficult to know which is more dangerous now: left wing Remainers casually branding anyone who protests against the Stop-Brexit movement as a racist; the sheer misjudgement to believe that the campaign to overturn Brexit isn’t a factor in the rise of the far-right; or the supercilious justification for a second vote, that “Brexit voters were wrong. They didn’t know what they were voting for”.

Maybe they didn’t. Maybe they did. Maybe there was something more intangible, emotional, going on in 2016, and maybe those feelings are still running strong.

Perhaps the misunderstanding stems from a class element to the post-referendum indignation which isn’t recognised enough. A whole generation of middle class left-liberals unaccustomed to not getting its own way has spent the past 30 months openly denigrating the loathsome 17.4 million, in the left-wing press, on TV panel shows and radio call-ins, and from the stand-up stages.

LBC’s James O’Brien probably holds the title; after months of bellowing at Leave voters on air he actually managed to reduce one to a snivelling “You were right… I was wrong… I’m sorry… I’m so sorry” through uncontrollable tears. Stewart Lee’s contribution: “It wasn’t just racists who voted to leave Europe. Cunts did as well”.

And strangely, people aren’t being won over by this. The impertinent lot that they are.

People, even Leave voters, are not as dumb as some like to think. They can see through the arguments that a second referendum is the only possible route now, for democracy’s sake. It isn’t about democracy – there are no Leavers pushing for a second vote, to ‘take it back to the people’. It’s about having another go, and getting a different result.

But pressing for a re-run of the 2016 referendum might yet achieve nothing. As things stand it is in fact making no-deal Brexit the most likely scenario. The entirely justified suspicion that a plot to stop Brexit might succeed is forcing many Leave voters to push their MPs to settle for no-deal out of exhausted frustration; better than having their democratic right snatched from them altogether.

In December leaders of the UK’s major industry bodies clubbed together to say that businesses are “watching in horror” as the political infighting leads us to this inevitable conclusion. A conclusion which would, unlike achieving a deal, mean the immediate introduction of extra duties and tariffs on imports, a potential meltdown in the national logistics grid, price increases in the shops, wiping out a good number of retailers’ wafer-thin margins and, in turn, causing the possibility of mass redundancies or company administrations.

In short, the worst thing that could possibly happen to the most precarious people in Britain, in the towns that have gained so little from EU membership as to have nothing to lose from leaving. Those for whom the left purports to stand and fight for, yet the right now sees as its best hope as a populist base.

If the referendum is re-run, it could easily end up in another Leave vote, against which there could be no appeal. Or the vote might well go the other way. Remain would win.

But what a hollow, yet lethal victory it could be for the left. One that implants a deep, degenerative resentment among the very people whose faith the Labour Party is desperately trying to win back – and instead send them straight into the arms of a grateful ring wing.

Of course the weariest Leavers might just never take part in democracy again, come referendum, general or local council election. But the most acidulated of the Brexit-betrayed would immediately look for revenge.  And who would lead them? A few sordid pied pipers linked to an expanding matrix of right-wing populist groups across Europe that is just waiting for a reason to start something big on the streets and inside the parliament buildings, and disaffected peoples ready to come with them.

Then we really will have a bloody problem: an enraged right, with a real reason to revolt handed to it by the very people who claimed they were the resistance.

If a “far-right street movement targeting Muslims and migrants” is this dangerous with just the possibility of a ‘People’s Vote’, what will happen when Brexit is overturned? Are we ready for a Tommy Robinson rally 50,000, or 500,000 strong? And if that happens will we still be clinging to the self-deception that Brexit is just a pretext?

Unlike elsewhere – in Italy, Hungary, Germany, France, the Netherlands, Austria, Sweden, Finland and throughout the Balkans – the far-right has so far been, I say with satisfaction and pride, an utter failure in the British Parliament. Even at the peak of his hype, Nigel Farage couldn’t win a green seat.

I say this as a Remain voter and a long-standing Labour member: are we really willing to risk undoing all that? To risk a Parliament in 2022 where Labour has lost 30, 40, 50 seats here in the Midlands where I live, and the North, to the Conservatives, or a UKIP reincarnated on a ‘Brexit-betrayal’ ticket?

By pouring everything into a second referendum, rather than working to make some good out of this mess, the People’s Vote movement risks two possible outcomes. If the campaign fails it might make a no-deal, hard Brexit more likely; here we are, after months of relentless, uncompromising campaigning, on the verge of crashing out. But if somehow it succeeds, it would ultimately be on Labour to pay the biggest price electorally, with the real risk of open revolt on the streets in the meantime.

We have less than three months to prevent this. And to avoid an economy-shocking, tariff-inducing, no-deal situation that would probably make all the worst fears about Brexit come true, with those already living in dire precarity (not the middle class stand-up comedians) getting it in the neck first.

A senior business leader I spoke to last week said “In a no-deal scenario, it’s the people who voted for Brexit who get most hurt by it”. There will be no satisfaction in vindication if this is allowed to happen. Only pain. The sort that comes when you play with fire as though it wasn’t hot, and other people get burned in the process.