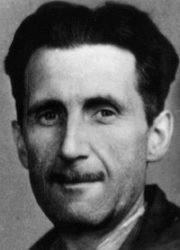 This article first appeared on the website of Independent Labour Publications (ILP).

On the 70th anniversary of his death aged 46, BENEDICT COOPER assesses George Orwell’s relationship with the ILP and its effect on his life, writing and politics.

When a sentry reported to John McNair, leader of the Independent Labour Party’s (ILP) Spanish Civil War contingent, that a “great big Englishman is here to see you”, he didn’t think much of it. This was late December 1936; thousands of foreign volunteers were pouring into Catalonia to take up arms for the Republic.

McNair still wasn’t impressed even after the new arrival had been shown in. The ungainly figure standing before him, declaring “I have come to Spain to join the militia to fight fascism” in a “distinctly bourgeois accent,” McNair later admitted, “repelled my Tyneside prejudices”.

It was only a short moment later that contempt was tempered by familiarity. The new arrival was an author whose works, McNair realised, he had read and respected. The ‘great big Englishman’ was George Orwell.

So began a seismic, formative period for Orwell, one that’s important as much for the idealistic spirit that drew him in, as for the “horrible atmosphere of espionage and political hatred” that, he later wrote, crushed it.

Orwell was willing to fight and die with the ILP and its Spanish ally, the Workers’ Party of Marxist Unification (POUM). But as a contrarian he was never ready to surrender his political, critical independence. “The revolutionary purism of the POUM,” he later wrote, “though I saw its logic, seemed to me rather futile. After all, the one thing that mattered was to win the war.”

The war was not won and the revolution died on the Catalan vine. Six months of mud, blood and mingling with the fractious forces of radical militarism, a “pawn in an enormous struggle”, dragged on. Days and weeks of inertia and tedium pierced by moments of terror, paranoia and betrayal, took their toll.

Just before he and his wife Eileen fled Catalonia, word reached them of the “evil and meaningless death” at the hands of the Soviet secret police of one of Orwell’s most admired comrades, ILP Guild of Youth leader Bob Smillie. That blow was soon followed up by the news that POUM founder Andrés Nin had been captured, brutally tortured and executed by Soviet agents on orders from Stalin. It was over.

Traumatised and nearly fatally wounded, betrayed by forces pulling proxy strings behind the lines, dismayed with elements of the domestic left that abetted Moscow in the act, and dreading the prospect that the moderate left would be sucked into a world war in defence of Britain’s colonial interests, Orwell turned to “the only party … likely to take the right line either against Imperialist war or against Fascism when this appears in its British form” – the ILP.

It was a short-lived romance. In September 1939, having altered his opinion on war with Hitler, Orwell quit the ILP, which remained opposed to it. As fervently as he had signed up just over a year earlier, the man who believed that “no writer can be a loyal member of a political party” had moved on, back to a path he preferred to walk alone.

He may have parted ways with the ILP, but the party played an inestimable role in shaping Orwell’s destiny.

In a letter to Cyril Connolly on returning from the war, Orwell wrote: “I have seen wonderful things and at last really believe in Socialism, which I did not before. On the whole … I am glad to have been on a comparatively little-known front among Anarchists & Poum people, instead of in the International Brigade, as I should have been if I had come here with [Communist Party] credentials instead of ILP ones.”

But there was a price. For siding with POUM and the ILP, now declared as proscribed Trotskyist organisations and part of Franco’s pro-fascist ‘fifth column’ by the pro-Soviet communist left in Britain, Orwell was sentenced to a form of political and literary exile.

As Christopher Hitchens notes in his short essay, ‘Why Orwell Still Matters’, in The Cambridge Companion to George Orwell: “By refusing to agree that Russia was on course for Utopia, Orwell took a position that put him in a very small minority. As a result, he was often defamed and slandered, and very often denied the chance to publish his work either in magazine or book form.”

The taint of his associations in Spain stayed with Orwell for the rest of his life. It cost him friends, comrades and editorial commissions – The New Statesman and the Left Book Club both refused to publish Orwell’s writing from Spain on the spurious grounds that he was consciously working against the Republican popular front.

The slanders against Orwell also cost him, albeit temporarily, his relationship with the publisher who had brought all of his previous works to the world, having first taken a chance on the young writer of Down And Out In Paris And London back in 1932. In a letter to socialist essayist Jack Common in 1937, Orwell sombrely reported: “[Victor] Gollancz won’t have any more to do with me now I am a Trotskyist.”

Embittered by his experiences in Spain, and the backlash waiting at home, with the “screaming and lies and hatred” of propaganda still ringing in his ears, Orwell took up the pen again. In the wilderness he had found a new driving purpose: to expose the Communist plot against his socialist comrades in the ILP-POUM faction and its willing executioners on the British left.

It was a bitterness borne with the betrayal in Catalonia still evidently fresh and sharp in his mind, but with ominous projections that extended far beyond the borders of Spain. “And thus we are one step nearer to the great war ‘against Fascism’,” he wrote in Time and Tide, in July 1937, “which will allow Fascism, British variety, to be slipped over our necks during the first week.”

Why it took Orwell another year to become a card-carrying member of the ILP isn’t clear. But when he did finally join the party, after months of social and political activity with key members, he did so with characteristic Orwellian resolve. He laid out his reasons for doing so in detail in his essay ‘Why I joined the ILP’, published in the New Leader in June 1938.

The experiences in the war had clearly had their role in bringing Orwell to this juncture. “Once I had grasped the essentials of the situation in Spain,” he wrote, “I realised that the I.L.P. was the only British party I felt like joining – the only party I could join with at least the certainty that I would never be led up the garden path in the name of Capitalist democracy.”

But the essay goes deeper, further back into Orwell’s past, back to the experiences that first set him on the path to the Spanish Civil War, after which biographer Bernard Crick posits that “most of Orwell’s formative experiences were over”. As such it is also something of a confession, an outpouring of all the major formative and informative moments up until that point, and a sign of just how anxious the times were.

“I have seen British Imperialism at work in Burma, and I have seen something of the effects of poverty and unemployment in Britain. In so far as I have struggled against the system, it has been mainly of writing books which I hoped would influence the reading public. I shall continue to do that, of course, but at a moment like the present writing books in not enough.

“The tempo of events is quickening; the dangers which once seemed a generation distant are staring us in the face.”

With the forging of an alliance between Hitler and Stalin in August 1939, those dangers took a huge sinister bound closer. The Molotov-Ribbentrop pact ended all hope of world war being avoided. It also marked the end of the road for Orwell and the ILP.

If Orwell had shared the ILP’s compunction of being dragged into war with Hitler, he was sharply opposed to his party’s line about the man whom the Fuhrer had chosen as his ally; the man who had stabbed them in the back in Spain.

“The cynicism and opportunism of the Russo-German pact turned Orwell to support of the war,” Crick notes. “The leaders of the ILP continued to call the war a capitalist-imperialist conspiracy; so Orwell, like many of its rank-and-file, quietly resigned.”

It was the latest vicissitude from a writer whose ceaseless intellectual and moral restiveness never allowed him to settle for long – certainly not in allegiance or compromise to a political party or movement.

Orwell’s membership of the ILP could be noted down as a passing association of expediency; the author, driven, stricken from the rough seas of political unrest and personal crisis, finding a temporary port in a storm. This would be to overlook a crucial moment in Orwell’s life and the role the ILP played in his development as a socialist, thinker and author with his greatest works still ahead of him.

The ILP helped shape Orwell and he helped secure, and clarify, the ILP’s once-maligned place in history.

In May 1937 the ILP and the International Brigade were bitter sectarian enemies. In 2013, the 75th anniversary year of the publication of Homage to Catalonia, Orwell’s novel took centre stage at the annual conference of the International Brigade Memorial Trust (IBMT). It was an important historical rapprochement; “a sign,” wrote the ILP’s Barry Winter at the time, “of how, at long last, we are able to move on”.

Orwell returned from Spain, Brockway noted, “far more mature as a socialist”. He was also a man shaken to the core of belief and faith, filled with a sense of foreboding; a man who, marching with destiny, by the side of the ILP, had seen from the high vantage point of the Catalonian mountains the storm clouds of world war burgeoning in the distance.

The vertiginous pinnacles of his own achievement, Animal Farm and Nineteen Eighty-Four, lay beyond.