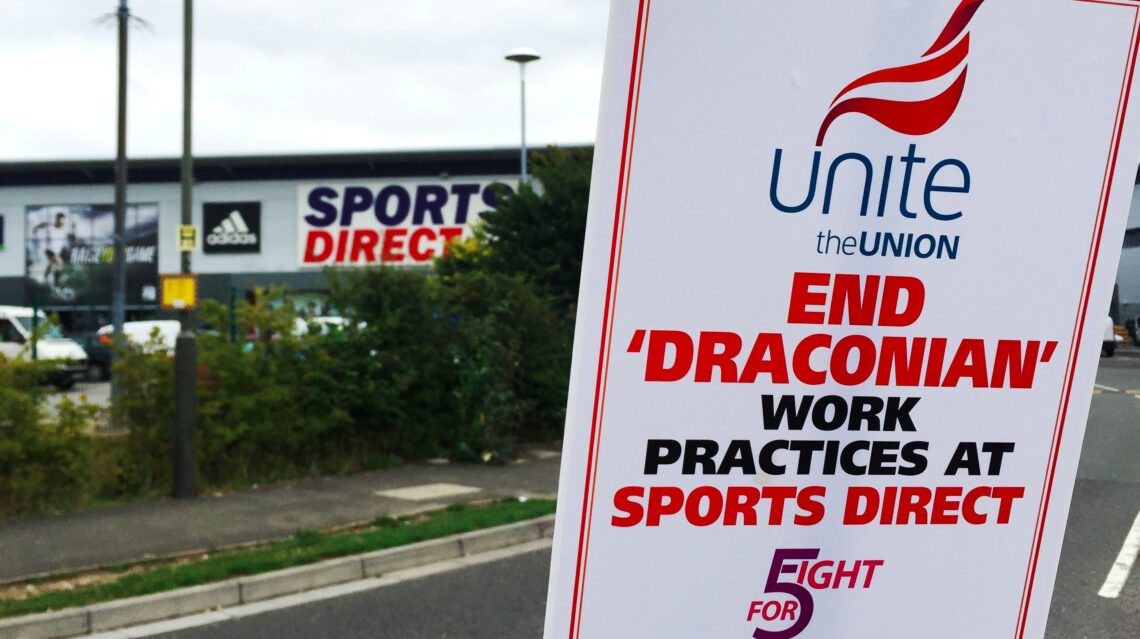 Everyone in Shirebrook knew there was something seriously wrong at the Sports Direct factory down the road. How many ambulances had they seen hurtling towards the plant in recent months? It was hard to tell. Sometimes they were called out more than once in a day.

When a local BBC Inside Out team looked into it the figures were as stark as the human stories behind them were bleak: 76 emergency callouts to the site in Derbyshire, in less than two years; reports of workers, afraid of the consequences of calling in sick, collapsing at work, suffering convulsions and strokes on the factory floor; heavily-pregnant women still grafting on the machines, including one who gave birth in a staff toilet.

The resulting public outcry forced Sports Direct owner Mike Ashley to appear before a Select Committee of the Department for Business, Industry and Skills. It led to a change in the legislation governing conditions for low-paid workers, set a precedent for the way unions investigate staff safety, and even forced reforms at Sports Direct.

“The investigative journalism done by Inside Out was the first key step that unleashed the whole process,” Iain Wright, former MP for Hartlepool, who chaired the committee grilling Mike Ashley over the scandal, tells me. “The lowest paid workers were being exploited by a very powerful company, and it was Inside Out that first shone a light on that.”

It took a serious investigation by a serious team of journalists to expose the “Victorian” conditions inside the Sports Direct factory. But it was local people, local eyes and ears, that first tipped them off.

With the way things are looking now, there might not be a light to shine on future exploitations. There won’t be anyone to hear what local people are telling them.

The BBC’s decision to cancel the latest round of Inside Out, citing social distancing implications due to the Covid-19 crisis, is feared to be the first euphemistic step towards axing the show altogether on budgetary grounds.

Taken alongside the confirmation that another of the pillars of the BBC’s regional news output, the regional Sunday Politics programmes, is also “being looked at”, a BBC spokesperson said, and an unsettling picture emerges.

When the BBC launched new weekly format Politics North in January, director of BBC England Helen Thomas said that it would be “people who will be at the heart of this programme”. The show would address some big questions, Thomas added: “What is firing up the audience, what are their concerns and what stories do they want to hear about how local services are delivered?” Less than five months later, the future of Politics North hangs in the balance.

Programmes like Politics North, Inside Out, and the regional Sunday Politics formats employ dozens of talented local reporters, producers, editors, camera crew, researchers, specialist production companies, and freelancers. Beyond the initial front line of journalists and production staff, there are countless others involved in the process. Local people; local eyes and ears.

“These great journalists are embedded in their communities,” Wright tells me. “They know how issues affect people locally. When I was an MP going on the regional program it was uncomfortable, I got a grilling, because they knew their local patch.

“These aren’t failing programs; these are award-winning because of the quality of their investigation programmes. They’ve been proved programme after programme that they’re providing that quality of insight that’s needed. You can’t afford to lose that.”

Not least for the serious potential impact on local democracy that the loss of these shows would cause. Inside Out is broadcast twice a year, with 11 regional variants; 11 local stories each potentially as important as the Sports Direct scandal. The regional Sunday Politics shows are the only opportunity people get to see their own MPs grilled on purely local issues.

Before she became an MP, Anna Soubry spent 15 years in broadcasting, fronting a number of regional and national shows including This Morning, Central News East and Central Weekend.  She tells me that the “erosion of local broadcasting” is “extremely concerning on a number of levels”.

“Inside Out looks at local issues and unravels local scandals that just couldn’t get the sort of exposure they need otherwise,” she says. “A national programme can be very dismissive of local issues. As soon as you start to take away programmes you inevitably take away resources at a regional level, and that has profound implications on any broadcaster’s ability to do a proper job. It will mean that all of the stories become about London.

“The number of occasions I would get a phone call on a Friday or at the weekend asking if I would do Newsnight or another show, and they’d say ‘Whereabouts in London are you?’ When I told them I wasn’t in London they’d say ‘Ah, well, we can’t get a crew to you then’.”

The absurdly monocentric nature of the UK’s media industry is stark enough as it is. The geographical inequality of opportunity in the journalism profession is astonishing.

Local newspapers, already pared to below minimum reasonable levels by cutbacks, seldom hire new staff, nor have the budget to pay freelancers at all, let alone the fair market rate. Local newsrooms are semblances of their former selves.

Save for a lucky few who make it onto local or regional trainee schemes, graduate journalists have no choice but to move to London and become one of the many ‘exiles’ you see scraping a career together in the capital.

This may well be a dream come true for many. For others, particularly people from working class backgrounds from outside London, who don’t have the luxury of taking long unpaid internships in the capital, it can be an uncomfortable and costly compromise they’d rather not, or can’t afford to make.

With the paring down of local programming like Inside Out and the Sunday Politics shows, yet more ladders into the profession will be kicked away. Local content will suffer. The BBC’s output will become that bit more generic, and London-centric, precisely at a time when the Corporation claims to be sharing more power with the provinces.

If, as feared, the regional Sunday Politics shows are scrapped, local slots will be permanently replaced by the whole-of-England format, broadcast from London. Producers and presenters who understand their region and its political nuances better than anyone will be superseded by factotum researchers operating entirely remotely from them, cut off from local eyes and ears.

When regional programming and local issues are treated as such expendable, optional extras, it’s hard not to feel that the BBC simply isn’t interested in journalism from the provincial hinterlands like the East Midlands and the North.

The BBC’s Annual Plan, released less than three weeks ago, explicitly states the intention to do more to cover “areas the BBC has traditionally served less well,” and “focus our local and regional portfolio to do more in the Midlands and the North of England”. If the Corporation is serious about delivering on such admirable promises, cutting the few remaining outlets for local democracy isn’t the best start.

A concerted effort to save Inside Out and the regional politics shows is gathering pace, regionally and nationally. The NUJ is lobbying Parliament, shadow cabinet members, local influencers and the wider journalism industry.

Last week Labour MP for Blaydon in Tyneside Liz Twist raised the issue in the Commons, stressing that that it is “vitally important that communities in the North East and across the country are given a regional voice, and that our politicians can be held to account”. Since then she has written to Helen Thomas directly urging the BBC to reconsider.

It might work, as other campaigns have – BBC 6 Music was rescued at the last minute. But only if there is far more action by members of the public, and greater solidarity from journalists all over the country.

Journalism is the link between the individual and society. Cut the link between local journalism and local communities, and you lose a vital democratic service to the people in them, possibly for good. As Twist rightly pointed out in her letter to Thomas, “if people lose this now, they might never get it back”.

The next big local investigation could be into something even more serious than the Sports Direct scandal. It might be the scandal of Covid-19 deaths in care homes, or the cuts to local public services that will doubtless follow the crisis, starting, inevitably, with the poorest towns.

In a world of such anxieties, at a time of such upheaval, we cannot afford to shut off the eyes and ears of local insight, nor the voices that speak for them. People and communities everywhere need journalism, and journalists on their side, or risk being left behind for good.