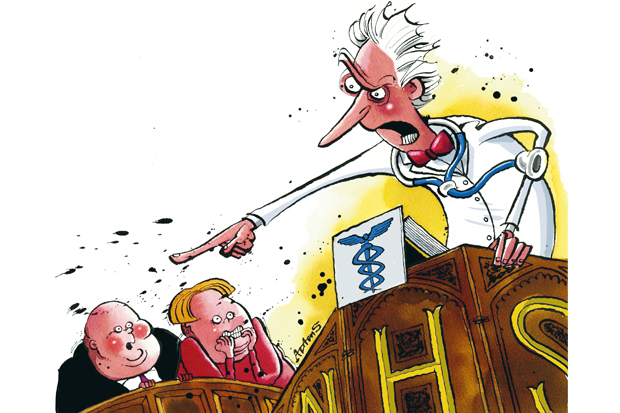 I realise that Douglas Murray, associate director of the Henry Jackson Society and polemic Spectator columnist, may have ideological even political reasons to bemoan the “perils of a socialised [healthcare] system”. That’s hardly going to come as a shock. What is surprising is that such an elevated journalist as he is willing to let so many innacuracies stand in this careless denigration of the health service.

But it’s a useful exercise – it proves that certain stripes within the right have set out to manipulate the truth about the NHS for ideological means. And why they’re wrong. (Incidentally my own writing on medical politics appears mainily on the New Statesman).

Murray believes that “George Osborne refuses to seek savings in [the NHS] budget and promised an unbudgeted further £9 billion”. Perhaps he is not aware of the fact that the Simon Stevens’ plan to which he (presumably) refers, and to which the government is committed, also calls for £22bn worth of cuts as a quid-pro-quo?

Much of the NHS has already been cut, drastically in fact. Not least Public Health -a fact, surely, he should be happy about. After all, most of his piece is taken up by a loathing for the role of the state in tying to educate the public about the perils of obesity, smoking and other killers, which he considers paternalistic sermonising.

Murray says that the NHS is the “only untouchable force in the state”. Perhaps he is not aware of the implications of the Health and Social Care Act 2012, which has instigated the largest top-down reorganisation in the history of the health service? Perhaps he has not read the words of Sir David Nicholson, the chief executive of the NHS at the time, who said these changes were so big they could be “seen from space”?

Perhaps he is unaware of, or indifferent to, the grim deterioration of working life in the NHS over the past five years. Of the non-existent morale within the profession; the alarming financial decline; the precarious state of staffing in hospitals; the cries of mercy from doctors, nurses, HCAs and more, or the clouds of anger, mistrust and discontent that are forming over the Department of Health; the fact that 87% of English trusts have been underfunded into the red – and then blamed for it.

Perhaps it is ignorance. But still, he feels qualified to denigrate the NHS and its exhausted staff in this careless, heartless, mindless way.

Murray advocates an insurance-based system, citing the huge and rising proportion of government spending that goes on the NHS. Perhaps he is also not aware that while this is happening in every developed country as a result of people living longer and drugs advancing, we actually spend less as a proportion of GDP on healthcare than every other country in the G7 other than Italy, far less than other countries with insurance based systems? Or that the huge changes to the way commissioning is carried out, and the phony markets that have been enforced on the “untouchable” service since 2012 have in fact added many layers of needless bureaucracy to the service and heaps of waste to the taxpayer?

Murray grudgingly admits that the NHS is “under pressure”. Well, yes, it is, severely under pressure. Not least from an irresponsible right-wing media with a facile understanding of the workings of the NHS, determined to use falsehoods to shatter public confidence and undermine a system thus far relatively but – to their delight – decreasingly, out of reach of the private sector.

A system that removes a huge financial burden from the poorest people. A national benefactor kept going by underpaid, under-appreciated staff whom articles like his only serve to depress further. And – if you must talk hard-nosed economics – one of the cheapest healthcare systems in the world.