Three men stand on a pavement in London looking reluctantly at the scene in front of them. A pile of maybe 20 bulging sacks of waste sit festering at the edge of the Occupy camp off City Road, stewing in the morning sun.

Not that these men are dismayed about them being there. It is after all their job to take them away, and a job they do day in day out all around the city. These council workers aren’t annoyed they’re there; it is that once again the protestors have welched on the deal. 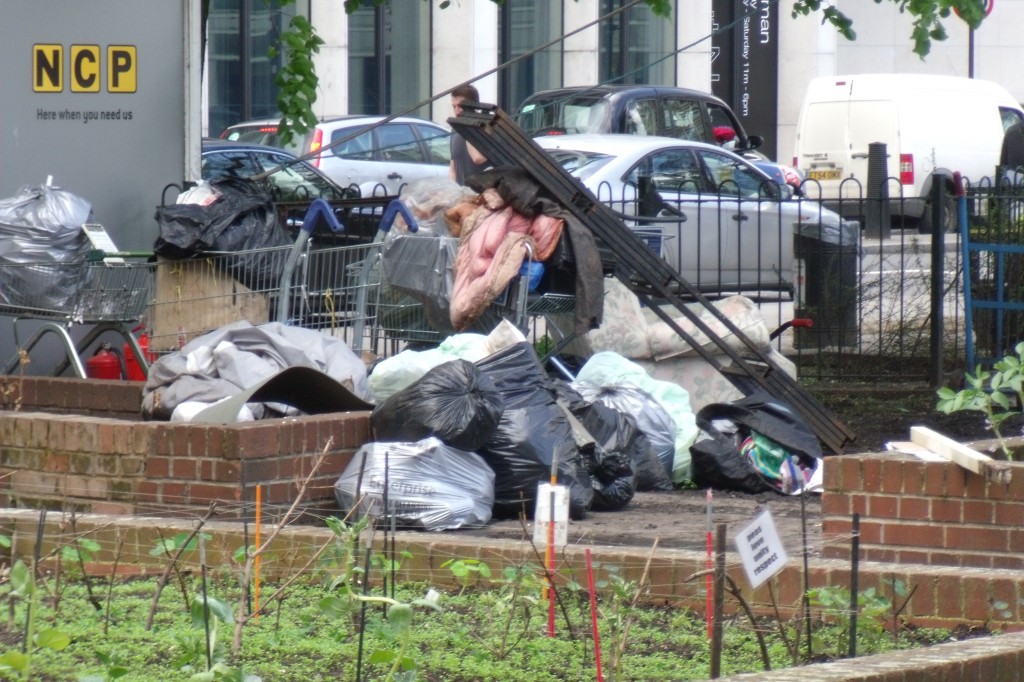 The agreement is, they told me: we give you the refuse sacks if you load the full ones onto our lorry, and we’ll take them away free of charge (council tax). But this morning nobody has got up in time. So after standing and waiting, they shut up the back of the lorry and drive off, bemused.

“That’s them all over isn’t it?” says one of the men before they leave. “They moan about the rats, they say there aren’t enough bags for them. But even the rats have gone now, it’s too dirty for them. We’re paying for that”.

Exactly so. Because someone always has to pay. So what is the Occupy movement paying for their protests all around the country? Presumably the argument is that until there’s something ethically worth paying for they are taking themselves out of the shabby pact we call society.

Which makes the rest of us who do pay our taxes and participate in this slimy system a real bunch of pigs, doesn’t it? Thank god for a tiny group of fearless warriors who refuse to be sullied by it.

And thank god too for the anti-Olympics army, who are planning to make the Games this year “the greatest act of non-violent civil disobedience of our age”, as OurOlympics spokesperson Kerry –Anne Mendoza put it recently. 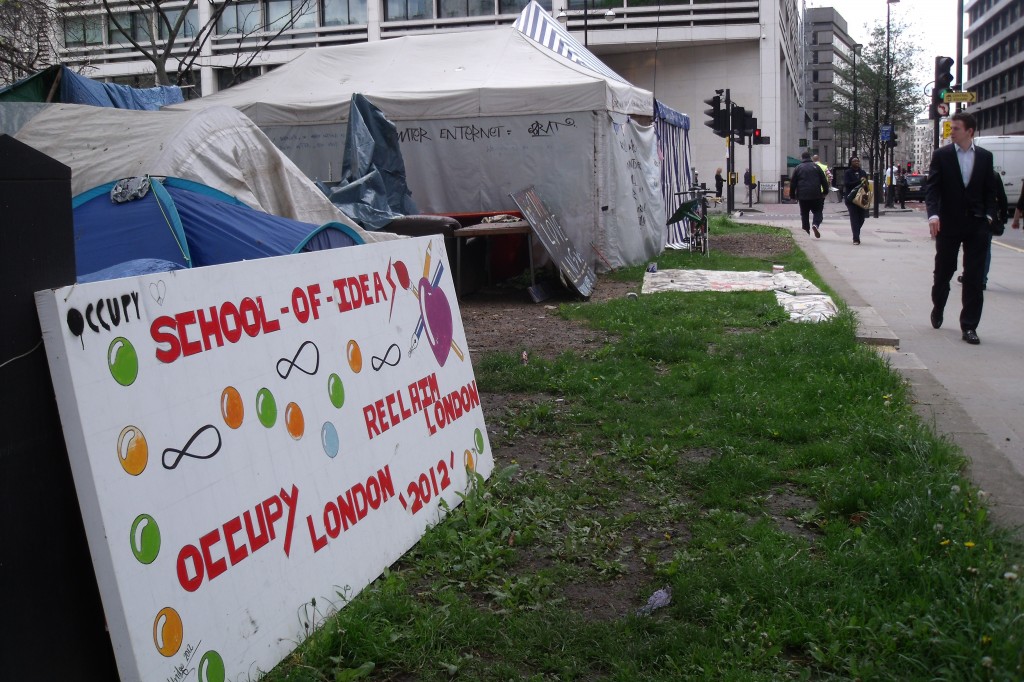 She explained: “Our job as members of a society is to make society as ethical, sustainable and responsible as we can and this form of protest is absolutely the centre of making sure our society is held to the highest ethical standards that we can possible do”.

Besides the fact that disrupting the games would be a smug sop to a tiny minority of protestors around the world who will be cheering for them, more to the point, it has no point. If just once the spokespeople for ethical living like Mendoza had articulated a convincing set of objectives or dared to put forward alternatives, there might be something to work with.

But they haven’t. All the bemused public hears is a stream of generalised grievances against, well, everything. It’s starting to have a ‘what have the Romans ever done for us?’ ring to it.

Which makes it all the more outrageous to suggest that they have a monopoly on ethics, and the rest of us are deplorable scum who need enlightening.

It’s not just that the ‘movement’ doesn’t seem to have any meaningful ideology, or objectives.

Or that it can’t really articulate why it’s occupying city centres.

Or its shallow misapprehension of political and socio-economic issues so impossibly complex that the even if the whole world joined it tomorrow would take a long time to solve.

Or that it isn’t even having any major effect on the national consciousness, at least in impressing any particularly ideals, agenda or even advice on the rest of us doomed state colluders.

Or that it is undermining genuine political activism by tarring it with a very crude brush. 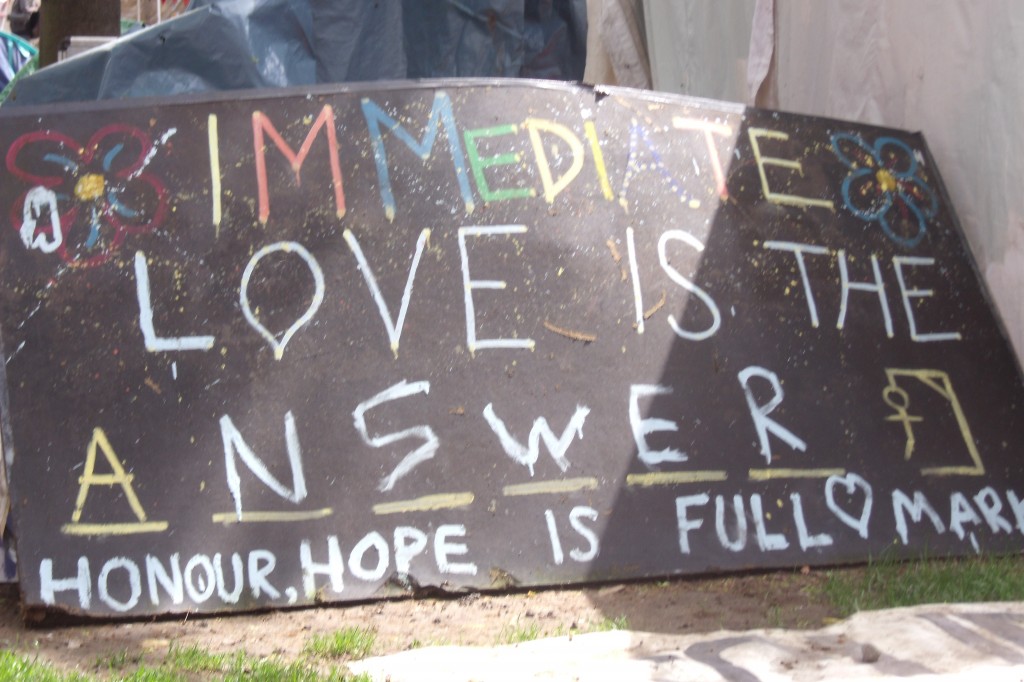 Or that it is offering no alternative to the evils of our time, other than facile non-participation in a system it blinkerdly describes back to the rest of us.

Personally it riles me because  I feel forced to turn my back on those who supposedly speak for reform. Like many others I feel angry about the type of ugly greed that has damaged the otherwise healthy capitalist economy, and the shameless regime of cuts this has given a pretext to.

There are many others who are thoughtfully opposing the savage attack on pensions, the immoral tax cut for the wealthiest, and the shadowy mugging of the last legacy of 20th century Socialism, the NHS.

But the occupy movement is playing right into conservative hands by wallowing in its own inactivity. It has the right sentiment but lacks all conviction.

We’d all like a better world. Most people have a social conscience and feel uncomfortable with the fact that there is severe poverty even in the UK, and high inequality, and a disturbing catalogue of social problems that go with this precarious gap. Very few people like the idea of prejudice, racism, exploitation and injustice.

But most people are too busy working their backsides off to feed their families and pay their mortgages and taxes. Most people don’t have the luxury of time to meditate on these thoughts, because they would rather enjoy the precious hour or two on the sofa after the children have finally got off to sleep and before they need to drag themselves to bed before another day’s work.

If the occupy movement thinks these people have no ethics, it’s the most outrageous statement in the history of political activism. Which it seems to be saying, because it thinks it is the only way these people, aka ‘society’, can be held to account.

When the protestors picked up their arms against Tesco in Stokes Croft, Bristol, they said they were speaking for the community. Yet a year on from the riots, Tesco is there and strangely, the local community are shopping there. Something must have got lost in translation.

They’re shopping there not because they are bitches to the system, love the store, or the Tesco beast as a whole, but because they need things like nappies and milk at eleven o clock at night and nowhere else is open. Presumably it would be more ethical to let the newborn splatter its waste on the living room floor?

The best thing the Occupy movement could do is to pack up their camps, now, and start living life. It wouldn’t be a defeat, it would be a victory, a sign that it’s willing to participate and do some good, the way that social workers, teachers, doctors, nurses, volunteers, street cleaners, police officers, even some politicians, do. 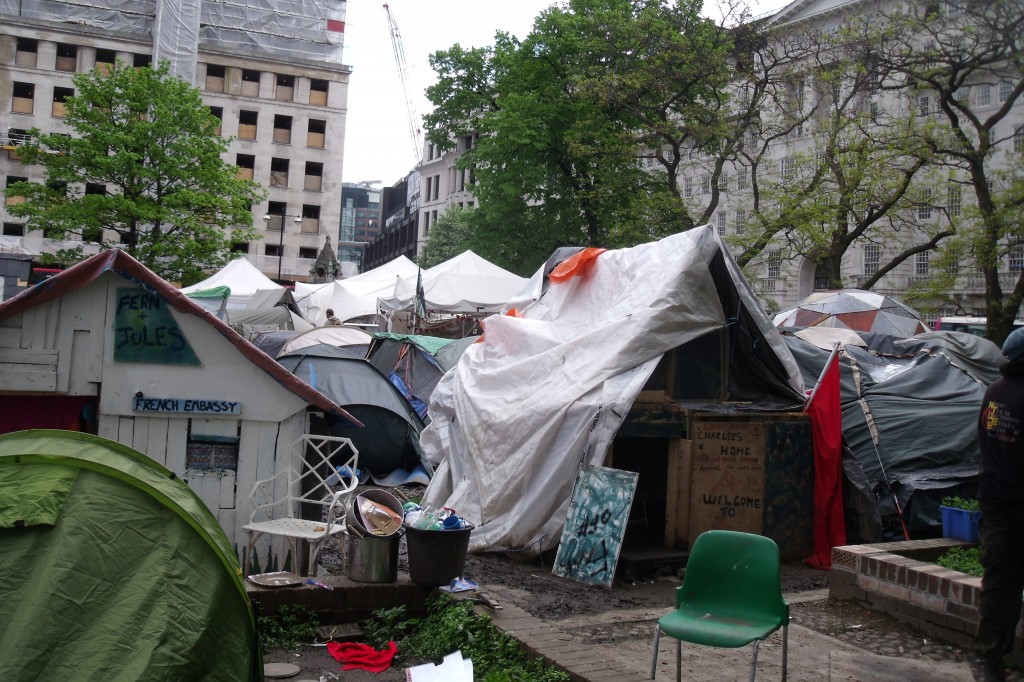 In fact any of us who pay into the same system that would happily collect a protestor who’d broken their ankle slipping over on a pile of refuse sacks, and fix them free of charge.

This kind of vague directionless civil disobedience is doing real harm for the dyed-in -the-wool political activists who have chosen a cause and know where they’re going with it, and where it ends.

The ones that have accepted that to make any difference to reality, you have to be a realist. Not sit in an Occupy camp daydreaming about how the world outside should behave more ethically.