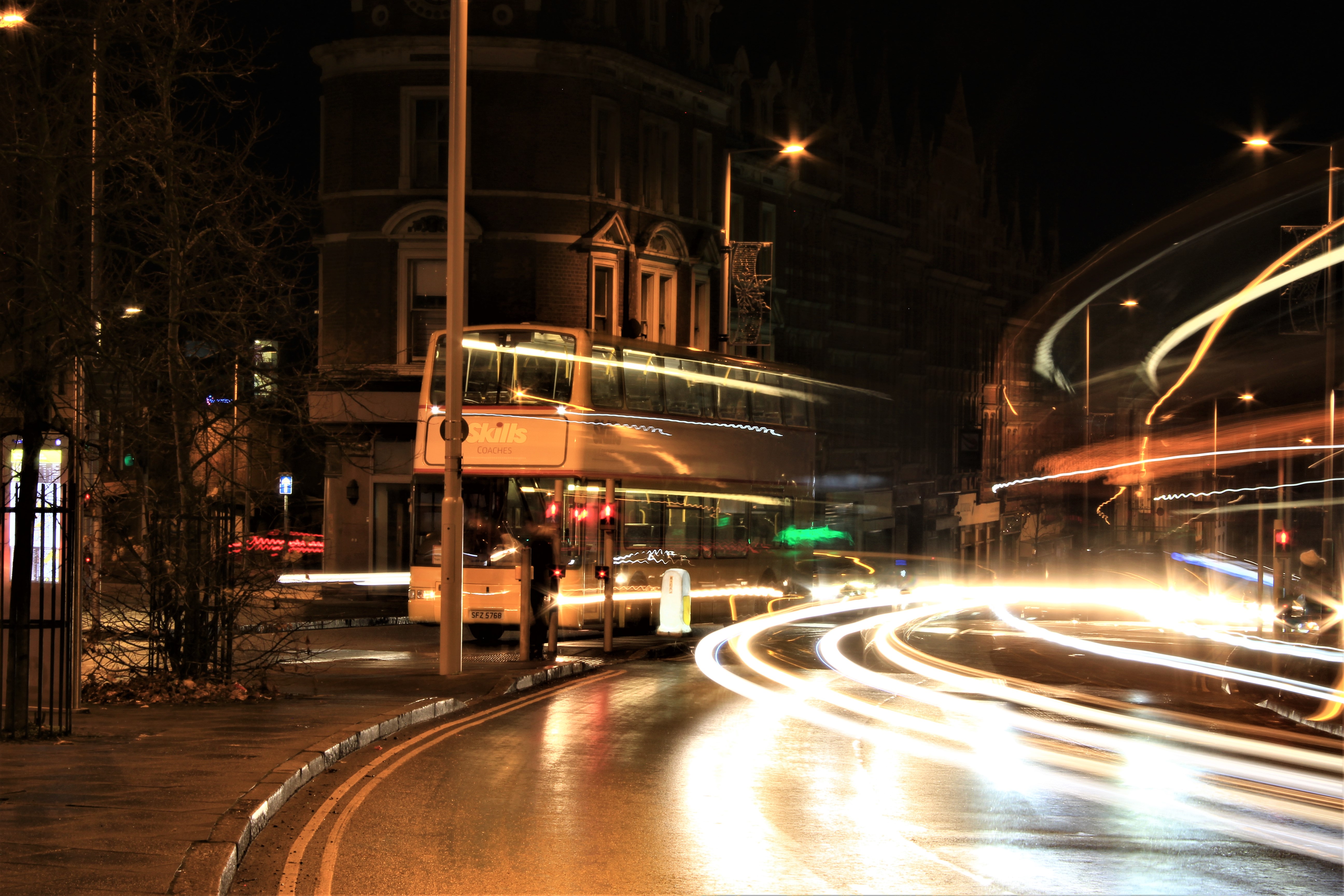 My piece for LeftLion magazine on the history of Canning Circus, Nottingham 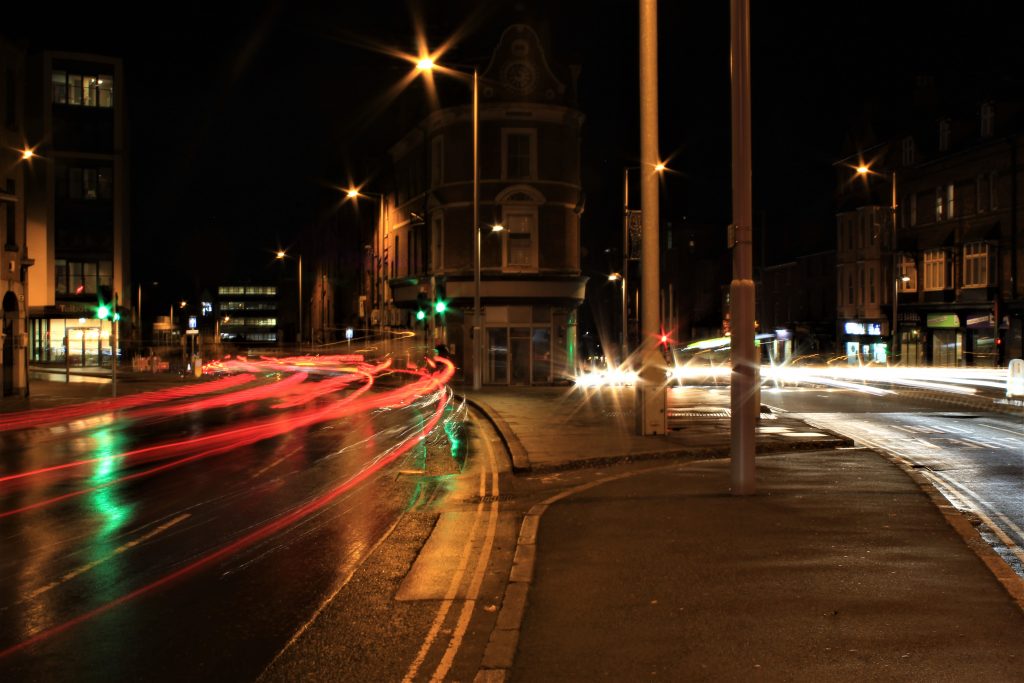 SIX ROADS meet at Canning Circus. From the north, three of the major highways into the city form a delta in the urban space between them; converging then splitting off, renamed, they ferry traffic and people down the hill out into the splintering, winding channels and streams of the city.

To the south lies the city centre, to the west, the Park Estate and the Castle. To the north, Lenton, the university, Wollaton Park and Radford, and to the east a canopy of green trees shelters thousands of gravestones, sweeping all the way down to Waverley Street and the Arboretum.

This meeting of flows has deposited centuries of memories on the land around it. From as early as the 8th century, multifarious lanes and pathways all led to the area once known as sandhills; people travelled and made their way in and out of the city, and life and times progressed.

In medieval times traders and travellers arriving in the dark of night would rest up in the inns and houses clustered around the junction, before making the final push into the city. In the morning they’d wake to the sounds of the windmills cranking and creaking away in the breeze, and the horse-drawn carts of commerce trundling over the earth.

When Queen Victoria was on the throne, the area was still known as Zion Hill – it has only been called Canning Circus since 1931 – and in that era of zeal and invention, the hill took on a new role of its own.

Much of Nottingham’s booming manufacturing industry was placed up here, and stayed until late into the 20th century. They say the air carried the mellow scent of tobacco from the factories down Alfreton Road and the streets were choked and blackened by traffic.

The sandstone hill already had a darker side by then – as the only ground, unconsecrated as it was, where murderers and people who had committed suicide could be buried. The many students who now call the area home thanks to a wave of residential developments might be blithely unaware that they are walking over the bones of centuries’ worth of the destitute, the long-suffering, and the killers deemed un-fitting for burial in good Christian graveyards.

They were a wildly superstitious lot back then. Crossroads were always favoured as burial grounds because, they believed, if a troubled soul with unfinished business in this life wanted to get back to torment relatives or acquaintances, it would have a harder time finding them across all those winding roads and junctions.

People had become somewhat more enlightened by the Victorian era. In 1836, the year before Victoria took the throne, work got underway to develop the General Cemetery, which welcomed its first permanent resident in 1838. A wise move to start preparing the ground this way, when you think what a surge of people was underway. In 1801 Nottingham was practically rural, with a population of just 28,801. In 1901 the population was 239,743, an increase of 732% in one century.

The city’s population exploded, but not for the benefit of most – who found themselves crammed into seething, stinking slums; the perfect incubators for contagious diseases, and helpless poverty.

Not helped by the water supply. Life is tough, life is hard, but thank the fates that you’re alive now, when you think that Nottinghamians used to drink water straight from the Trent, infused with the unfiltered sewage of everyone who lives upstream. And bear in mind the Trent goes through Derbyshire before it gets here.

The alternatives weren’t much more salubrious: from one of the wells up on Zion Hill, the ‘drinking’ water pumped out was found to contain 31.5 grains of solid effluent per gallon.

As the water cleared up and the century rolled on, the circus took on its modern shape and the features we see today: the sky blue Canning Terrace that stands as the gateway to the General Cemetery; the striking rounded redbrick building on the fork between Derby Road and Wollaton Street, one of the earliest Boots the Chemist stores; the Sir John Borlase Warren pub, named after the Nottinghamshire naval hero and MP who became an Admiral in the Napoleonic wars, and who personally bought the beers in for whole pubs’ worth of town centre drinkers, the day they gave him the freedom of the city.

Canning Terrace, which is currently undergoing restoration works, is named after George Canning, one of the big names in national 19th century politics who held many of the top jobs in Westminster, eventually becoming Prime Minister in 1827. Despite only holding the job for four months – Canning is the last British Prime Minister to die in office – as a reforming Tory, rare supporter of Catholic Emancipation and opponent of slavery, he made an impression. The terrace that stands there today, and which was built as almshouses for the poor, was named after him; in 1931, the whole area followed suit.

While in one direction, Radford, Lenton and Alfreton Road were darkening in soot and smoke, down another of the streams that flows from the circus, the Ropewalk, or Victoria Street as it was known then, was heading for the well-heeled grandeur you see today. The entrance way to the Park Estate and the path to Nottingham Castle and Standard Hill, the Ropewalk is striking for its elegance, and for its local juxtaposition. With Radford down one offshoot and the Park down another, Canning Circus might be the starkest and most physical border-post in Nottingham’s rich-poor divide even today.

Some of the most arresting features of the area aren’t even visible to a passer-through. Even if you’re sitting in one of the historic pubs of the circus, the Sir John or the Falcon, or the modern-day jewel in the crown of the hill, The Footman’s Rest, you could be totally unaware of the labyrinth beneath your feet.

All 500 or so cave structures in Nottingham are man-made; carved out by hands and picks for well over a thousands years. They were largely functional storage rooms, kilns, early refrigerators, tanneries and the odd dungeon, devoid of mystery, despite the many tales that have inevitably been spun. In fact, as the caves underneath the Sir John Borlase Warren show, they were generally nothing more than free storage cellars if you were willing to put in the spade work.

One of the magnificent exceptions lies underground close to Canning Circus, the work of an eccentric landowner, Alderman Thomas Herbert, who commissioned a series of remarkable pieces of sculpture in the sandstone on his newly-acquired property. One of these is said to resemble an Egyptian temple, with a façade of pillars, and carvings of gods and goddesses and druids priests within.

Some pictures exist of the mysterious ‘Columns Cave’ within the complex – the Nottingham Caves Survey has produced a dramatic virtual flythrough of it, and many of the other subterranean warrens of the city – and there is the extraordinary ‘Daniel in the Lion’s Den’ carving, based on the Old Testament story. The fact that these are all out of reach for the public has piqued the interest of history lovers and sprinkled mystery on the whole story; just ask the folks of the Nottingham Historical Archaeological Society, who explore the caves of the city in search of more clues.

They take the time, to make up for the rest of us who just zip through today; over the graves of the tortured souls long-gone and the mysterious cave of columns below; where the paths have crossed for centuries past, on the city’s ancient hill.