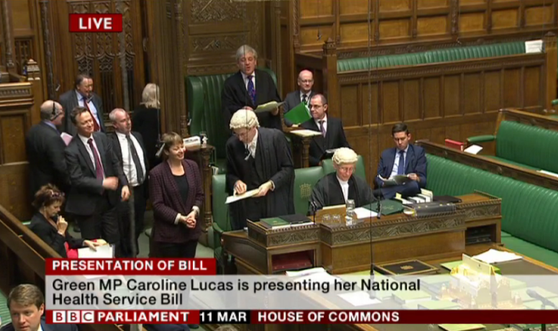 First published in the New Statesman on Wednesday March 11th

Later today, in the dusk of this parliament, a new Bill will get its first and perhaps only reading in the Commons. It’s unlikely to set pulses racing in any of the main party machines, but in certain circles the NHS Bill [3] represents the last ditch to save a dying public service.

It is the result of three years of patient work led by two leading public health experts, Professor Allyson Pollock and Peter Roderick of the Centre for Primary Care and Public Health at Queen Mary, University of London.

In the bill, they say, lies a trail of breadcrumbs to take us back to a different era. A time before the Health and Social Care Act; before the NHS was such fertile ground for profiteers. A time when money allocated for patient care wasn’t routinely squandered on futile bidding wars, failed private experiments, a contrived internal market and debilitating PFI repayments.

“If we don’t bring in legislation then privatisation and the breakup of the service will continue; by 2020 the NHS will be unrecognisable”.

Andy Burnham has said in no uncertain terms that a Labour government would repeal the Health and Social Care Act [4], and end the “Tory market experiment in the NHS”. Strong words, and a welcome departure from the New Labour days when much of the damage was done.

But this isn’t a Labour Bill. The political will [5] has come from the Green Party’s only MP, Caroline Lucas, and a Liberal Democra [6]t, Andrew George. It’s backed by rebels from across the benches, PPCs, medical professionals and campaign groups throughout England.

Why do this now, with such a solemn pledge from Labour firmly and repeatedly on record? “They have said they would repeal the act”, says Pollock, “but they haven’t said what they would replace it with and how they would go about reinstating the principles of the NHS”.

If Labour wins enough power to repeal the Health and Social Care Act, and stays true to its word, it will be a tremendous victory. But with contracts in place and business plans cooked up, there will be plenty of clearing up to do even from the two years since the Act came into effect. Arguably, too much than simply canning it can possibly manage.

“We’ve already come too far down this road,” says Caroline Lucas, speaking to me yesterday. “We want to roll back 25 years, look at the whole programme of marketisation that New Labour brought in right up until what’s happening now”.

In its own words, the Bill proposes to “fully restore the NHS as an accountable public service by reversing 25 years of marketisation in the NHS, by abolishing the purchaser-provider split, ending contracting and re-establishing public bodies and public services accountable to local communities”.

How will this be done? With what now seem like very radical ideas behind them, some of the key objectives are:

Given the timing, it’s less clear what can be achieved in the coming weeks – indeed it has attracted its critics [7] for this reason. But as Lucas tells me: “This is about setting an agenda for the election, and for the next parliament. I don’t think it should be about just choosing between the Efford Bill [8] and the status quo. We need something more robust”.

If Labour is serious about ending the Tory market experiment, the party should take note of today’s proceedings. In an emerging corporate climate, the NHS Bill is a refreshing reiteration of the founding principles of a health service being systematically altered, and a blueprint for restoring them, laid down in black-and-white, waiting for anyone with the will to pick them up.