My exclusive story for The Mirror, uncovering the fact that a recipient of a major government contract to deliver Covid testing systems – since withdrawn over safety concerns – is a considerable donor to the Tory party.

EXCLUSIVE Ministers halted the use of test parts supplied by Randox Laboratories with immediate effect and until further notice.

Coronavirus tests given to thousands of Brits and supplied by a firm which has donated £160,000 to the Conservative Party were pulled last night over safety fears.

Care homes in England were ordered by the DHSC to halt using the testing kit produced by Randox Laboratories, on the grounds that they “may not meet our required safety standards for coronavirus testing”.

Randox Laboratories was awarded the £133 million contract by the Department for Health and Social Care (DHSC) in May after a non-competetive bidding process.

The firm has donated a total of £160,800 to the party since April 2010, according to the Electoral Commission.

The Mirror understands red flags were raised about the ‘CE’ safety stamps on the Chinese-made tests supplied by Randox.

Physical inspection of the tests led to questions about the sterility of the swabs.

In a statement issued yesterday, the Department of Health said: “As a precautionary measure and while we investigate further, NHS Test and Trace are requesting that all settings pause the use of Randox test kits with immediate effect and until further notice.”

Randox, which described its system as part of the “cornerstone of Government testing across the UK”, was awarded the contract in May as the Government was racing to meet its target of 100,000 tests per day.

Grilling Mr Hancock in the House of Commons on Thursday evening, shadow Health Secretary Jon Ashworth questioned the awarding of the contract which he said was “given to Randox without any competitive tender”.

The firm, based in County Antrim, posted on its website in June: “Our test was adopted by the NHS and Public Health England and forms the cornerstone of Government testing across the UK.

As a result of the recall of the kits, a number of testing sites have also been forced to suspend all activity until further notice.

This afternoon Wirral Council announced that it had closed down the Bidston Coronavirus Testing Site near Birkenhead “for precautionary reasons, due to a safety recall issued by the Government on Randox test kits”.

The Department for Health and Social Care said there wasn’t enough time to perform a full procurement contest because of the short notice in ramping up coronavirus testing.

A spokesperson said:   “The speed at which we have increased our testing capacity is unprecedented and a real success made possible by teamwork between the Government and key partners.

“In a matter of weeks we have engineered the largest ever expansion of British diagnostic capability – scaling up a nationwide network of drive-in testing sites, introducing home testing, deploying mobile testing units operated by Armed Forces personnel, building three new ‘mega labs’ to analyse test samples, and more than doubling the capacity of the NHS and Public Health England laboratories.”

When Mr Patterson’s links to Randox – and the non-competitive process of awarding their contract – first emerged in May, the firm said: “It should be noted that Randox is only one partner within a multi-partner, national testing programme.

“The programme is being run and coordinated by the Department of Health and Social Care and they would be best placed to comment on the overall programme.”

Mr Patterson declined to comment to Buzzfeed News when his links to the firm were revealed in May.

There’s no suggestion of any wrongdoing on the part of Mr Patterson.

Randox made headlines in 2018 after dozens of suspected drug drivers had their convictions quashed following an investigation into alleged data tampering at their lab.

Some 10,500 test results had to be reviewed in what the National Police Chiefs Council described as a “most serious breach” of forensic science standards.

Talk of the town: On the road in Worksop with Lisa Nandy 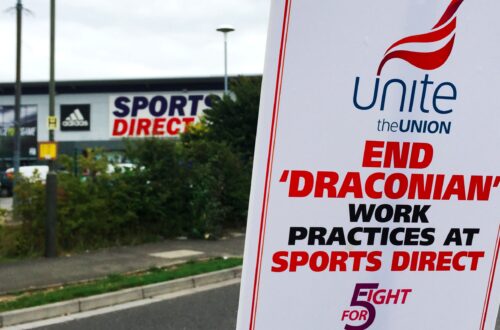 The future of regional journalism is “being looked at” by the BBC. It would be a fatal error to cut such vital community ties.