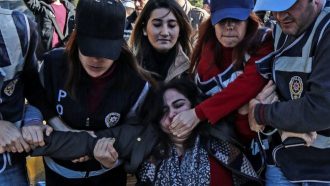 In November the European Parliament voted to freeze Turkey’s bid to join the EU, with dire warnings over human rights violations, the systematic abuse of women and children, daily arrests of MPs and journalists, and a brutal campaign against the Kurdish minority. With a referendum in April likely to hand President Erdogan almost total executive power over Parliament, Turkey stands poised at the crossroads. The world needs to watch carefully to see which way it goes.

“The police are at my door”, tweeted Selahattin Demirtas, in a last desperate message to his followers. Seconds later, officers forced their way in, arrested the MP, and dragged him off into the night. Demirtas hasn’t been heard from on Twitter since – that was three months ago.

Somewhere during those same chaotic hours, his colleague and co-chair of the main Kurdish political party HDP, Figen Yuksekdag, was taken from her home, as were nine other MPs; Twitter, Facebook Whatsapp even YouTube all mysteriously shut down across Turkey.

By morning it was confirmed 11 MPs from HDP- the third largest party in the Turkish parliament, with 6 million votes in the Turkish general election a year ago – had been arrested for alleged connections with proscribed Kurdish militant group the PKK. Since then, arrest warrants for four more HDP MPs have been issued and yet more Kurdish MPs – from other parties – have been targeted. Including Sebahat Tuncel, co-leader of the Democratic Unity Party (DBP), who was dragged away by police as she protested the HDP arrests, outside the courtroom in Diyarbakir.

It is the latest development in a dark post-coup era in Turkey. The international legal community is watching with grave concern at what the chair of the Human Rights Committee of the Law Society of England and Wales Tony Fisher, in a report into the state of Turkey’s justice system, describes as “spiral towards oppression with all fundamental rights and freedoms compromised”.

Fisher identifies a wave of disturbing new powers granted to and being used by Turkish authorities “curtailing fundamental rights”. Through visiting the country and talking to lawyers on the ground, he says that there is evidence that security forces can and will now limit access to lawyers for up to five days; record interviews between lawyers and their clients and restrict access to just one hour a week; confiscate hand-written notes from lawyers post-interview; produce next-to-nothing by the way of evidence against suspects.

Press censorship is rife: dozens of journalists are currently in prison, and more than 130 media outlets have been closed down by the state, eliciting what should be a damning statement in the EU’s latest accession report into Turkey’s prospects of joining the club. Yet outside of the journalist community – the British National Union of Journalists (NUJ) and the International Federation of Journalists (IFJ) have ongoing campaigns – there is very little international rage or solidarity.

The point of no-return could come in April, when a referendum is due on a series of sweeping amendments to the constitution. Amendments which could take Erdogan one step closer to his ultimate, or perhaps, penultimate goal, of an even more bullet-proof executive presidency, which Fisher argues would “give the president powers to chair cabinet meetings and introduce legislation”.

So emboldened is Erdogan by last year’s failed coup, and Western inaction and apathy to these disturbing events, that he has declared in public that he would consider re-introducing the death penalty in Turkey. Teachers, journalists, judges, military leaders, police officials, local government officials, local governors and deputies, public prosecutors, professors and university staff right down to the janitors have been arrested. Some 70,000 have felt the force of state control, since July. And among them are key Kurdish political targets, such as the Mayor of Diyarbakir and her deputy, in the days that followed.

There is Leyla Birlik, MP for Sirnak in Southern Turkey. Though she suffers from liver disease and other medical complications, Sirnak was arrested on November 5th and placed into solitary confinement in Silivri prison. In November as part of an international solidarity campaign by politicians supporting the HDP MPs, Labour MEP Julie Ward tried to gain access but was refused and marched away. Ward, a campaigner for women’s rights and children’s rights, says that Birlik’s arrest was “physically violent”, and that the MP was “dragged into a police vehicle and interrogated by anti-terrorist forces without any contact with lawyers”. Especially brutal treatment appears to be reserved for the Kurds.

Because of course, the Kurds are a special project for Recep Tayyip Erdogan. The HDP isn’t just the third largest party in parliament, with an increasingly magnetic effect on non-Kurds in Turkey. It is the legislative tip of a major thorn in the President’s side. The Kurds – an enemy of ErdoGan’s state in Turkey, yet an ally of the US in the fight against ISIS in Syria and Iraq – are an insecure people living day-by-day in an increasingly hostile Turkish state that could be set for civil war.

Throughout Turkey Kurds are barred from being recognised even as an ethnic group, let alone for their claims to an autonomous self-governing region within the wider state. There used to be 39 Kurdish language television and radio stations before the coup, now 16 remain (one of the broadcasters shut down was a Kurdish children’s cartoon channel).

In the Kurdish eastern and south eastern provinces dotted on and around the borders with Syria and Iraq, “curfew zones” put in place and enforced from last summer up until this spring led to hundreds of civilian deaths. Even in Syria, fighting ISIS as part of the Syrian Democratic Forces (SDF), with the blessing of the US, the Kurdish YPG – among them British volunteers – are not safe from Turkish shelling.

In May the Turkish constitution was amended to strip immunity from prosecution for members of parliament. It wasn’t written in the text, but critics have argued that the move was chiefly to fulfil a long-held ambition, of clamping down on the Kurdish movement in parliament. November’s alarming developments would appear to back that up.

Prior to the vote for Turkey’s membership accession to be frozen, in a debate in the European Parliament in November, Frederica Mogherini, high representative of the European Union for Foreign Affairs and Security Policy and Vice President of the European Commission, citing “extremely worrying developments”, said that EU’s relationship with Turkey “is at a crossroads, because Turkey itself is at a crossroads”.

Perhaps it was no coincidence then that earlier in the day Prime Minister Binali Yildirim announced that a bill to effectively legalise child rape was to be dropped after furious opposition both domestically and internationally, but, Ward tells me before the debate, “the fact that that was in someone’s mind is horrifying.”

She says: “What kind of country is this where this could even have a serious possibility of being introduced? This is what women and children are up against. Turkey is a Western country but it’s turning its back on Western values of freedom and democracy.”

For the Kurdish MPs and their supporters, who are some of Turkey’s most vociferous campaigners for women’s rights and LGBT rights, there is every reason to be afraid. Ward tells me they are being targeted for multiple reasons, and are living in fear every day. “They know that knock on the door is going to come but they are positive and they will never give up,” she says. “I salute them.”

The Kurdish people are used to being kicked about. It’s happened in Turkey for decades, and in Iraq, and in Syria, and in Iran. They’re also used to falling in the West’s blind spot. But the arrests of elected MPs should be cause for deep alarm to anyone with even the slightest affection for democracy.

As president of a NATO member and the filter between the European Union and the millions of politically toxic refugees fleeing Syria and Iraq, Erdogan knows that Western leaders will turn a blind eye however much of a sham Turkish democracy becomes. He also knows that incidents such as the arrests of Kurdish MPs will illicit little more than a few statements from the international community leaving him to get back to business.

The European Parliament’s decision to suspend Turkey’s membership is a big moment – symbolically – but whether it achieves much in reality is far from clear. Already Erdogan has threatened to unleash hundreds of thousands of refugees into Europe should the EU go through with it, and there are suggestions that Turkey may even pull out of Nato and enter into the Shanghai Cooperation Organisation (SCO) with the approval of Moscow and Beijing.

Posturing it may be, but either way Erdogan is defiant as he stands at the crossroads. Turkey has already lost any pretence at Western standards of democracy and liberal values, and its president has many enemies to silence before he is done. So on it goes, Erdogan’s metamorphosis into a totalitarian dictator; and on it goes, the Kurdish question.