I declined. But I’ve often thought perhaps I should have gone. I’ve tried to picture the scene, and me standing there, and wondered how I would have felt. Whether it might have drawn some conservative, reactionary indignation from me. Or whether it might, in fact, have been fascinating and resonate with meaning.

I’ll never know now. But I imagine it feeling a bit like watching Russell Brand at work. Often when I read a Russell Brand comment piece, or see his face on TV, those big doe-eyes backlit with a burning ego, or, these days, when I see him on a stage addressing his legions, I get the same sensations I imagine I would have felt standing in that artist’s bedroom. 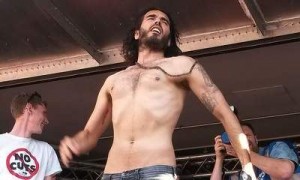 Russell took his t shirt off for the revolution today. He bore his chest (not, of course, for the frisson of sexual excitement that it gave him) to the 50,000 strong-crowd and proclaimed the revolution alive and well.

He believes his “peaceful, effortless and joyful” revolution is going to change the world. He urges people not to vote; to end the disconnect between politicians and the public. He believes in Socialist egalitarianism and a “massive re-distribution of wealth”. He loathes profit.

Very few people pointed out that a month before saying a lot of this on Newsnight, back in November, he had just bought himself a $2.2m Hollywood mansion on the back of profit. Enormous gains from a career hosting shows riddled with advertising, being the face of numerous corporations’ campaigns, and appearing in commercial box-office hits on both sides of the Atlantic.

But the most sickening thing of all is the way he has hijacked the “revolution”, and managed to make it all about him. Yes, he is drawing attention to the flaws of austerity, the odiousness of (other people’s) greed and the fact that the public is utterly sick of feeble politicians.

The next stage, most of us then realised, is doing something about it. Finding a cause. Because there will be no revolution, I’m afraid.

Russell Brand says we shouldn’t vote, because “fuck them politicians”. Well, sadly, he got his way. Not enough people did vote in the latest local and European elections, and look what happened.

He sees no value in the gains won through the decades of Chartism, Trade Unionism and the Labour Party in securing access to democracy for all, rights for workers, protections for the weak and countless social reforms. This is not only ludicrously facile, but deeply offensive, especially to those who still don’t have the chance.

Far far greater people than Russell Brand have worked with the democratic system. To introduce the NHS, the minimum wage, health and safety for workers, the weekend, freedom of speech, racial equality, and so on and so on.

They have all understood that political change comes through fighting gruelling little battles, and losing half of them. It’s ugly, and it’s hard and it’s unrewarding. At a rally outside the Conservative party conference in September, I met a man who had spent 30 years on the CND trail. He is, he admitted, no closer to his goal than when he started.

In my limited experience, the most energy and inspiration can be found in the Unions. They fully understand their industries and the risks they face, and they advocate unilateral activism and engagement with politics at the same time.

They understand that the real business of activism takes commitment, self-sacrifice and, in many ways, a disregard for one’s happiness. When you start to really engage, reminders of the problems of the world are all around you. The infuriating hypocrisies, the corruption, the whole miserable injustice of it all can really haunt you. It’s not pleasurable and I’m sure most would admit, there are times when the idea of folding your hand and walking away seems quite appealing.

Instead of deflecting the spotlight he has gained onto the thousands campaigning over austerity, or NHS privatisation, nuclear disarmament, disabled rights, the living wage or the cost of living crisis, etc., Brand has succeeded in getting all the attention for himself.

And he’s achieved this without ever actually getting his hands dirty by touching the boring stuff. Like the Monday evening meetings with the same six faces, sipping tea from thin plastic cups, hearing the treasurer’s report about the £178.23 in the kitty and how best it could be spent. Or dishing out leaflets to a river of blank faces passing by, from some rickety wooden stall in some market square in some town somewhere.

But Russell Brand doesn’t want to do any of that. His commitment has always been to one unwavering cause: himself. His revolution is just the latest episode from a long-running show. And when he decides he has stayed around long enough to be namechecked for any future success in the protest movement, he will move on. And he will have done the whole notion of activism more harm than good.

But there’s something more sinister about Brand. He has appropriated a whole movement for his own cynical, egotistical gain. He’s tapped into a source of energy with its genesis in something far more serious than his own short-term, narcissistic agenda. There is genuine dissent out there, and there are people who are working their way through the swathes of fine print, the tawdry legislative details of this government’s attack on the benevolent spirit of this country’s public system, and trying to work out against all odds how they can counter it.

And then, there is Russell Brand: bare-chested, hand-in-pants, pumping, and tugging, and sweating away.