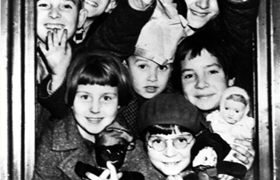 In the 1980s a Nottingham social worker uncovered a “government-approved programme of betrayal, institutional abuse, colonial callousness, racism and deceit”. Here’s my feature for @LeftLion on Margaret Humphreys and the child migrants scandal

Gripped with terror, a young mother races along the crowded platform at Liverpool’s Lime Street station, her eyes wildly scanning for any sight of her son. She hasn’t lost him in a moment of lapsed attention – her little boy has been taken from her.

Then suddenly, amidst the tumult and the smoke, there he is. Her only child, helpless and confused, on board a train that in a few seconds is going to grind into movement and take him away. The stricken mother calls out to her son through the window. Hearing her desperate voice, he jumps up to an open window and cries out to her as she rushes down the platform towards him.

“Stop the train! Stop the train!” she screams, straining with all her strength to get into the carriage to reach her boy. But it’s too late. The machine has already begun to creak, groan and hiss into motion. A few moments later she stands alone on the platform, helplessly watching the train slip away under a tower of smoke rising up into the cold, grey sky. Her little boy is gone.

What took place that awful day in the late 1940s became one of countless traumatic memories that emerged when the scandal of UK child migration was finally exposed. By the time it was stopped in the 1970s, the shameful policy that claimed the little boy on the train led to as many as 150,000 children being shipped from Britain as chattel to the most remote corners of the former Empire. They were amputated from their roots, stripped of their identities and fated to suffer violence and sexual abuse on a mass scale.

The suffering they endured would cling to them long into their adult lives. Many died before the world had even learnt of their pain. But many more did receive salvation, thanks to a social worker from Nottingham who has dedicated more than thirty years of her life to the lost children of the empire.

A single letter back in 1986 changed Margaret Humphreys’ life, and began a series of extraordinary events that would eventually touch millions more.

The letter was from a woman in Australia who was planning to get married. As she waited to take the next step forward in her life, she had been forced to look back. It was a confusing, unsettling experience: the woman didn’t know who she was.

All she knew about her early life was that she’d grown up in Nottingham, and somehow ended up in Australia after being told of the death of her parents. She didn’t have a birth certificate, which she needed to get married, and was looking for help back in Nottingham to track it down. And there was a chilling detail in the letter: she remembered that on the boat to Australia there were dozens of other children, all orphans.

Margaret was the right person to ask – at the time she was a Nottinghamshire County Council social worker, operating around Radford and Hyson Green in child protection and adoption services. She agreed to do some research for the woman, even try to track down her parents’ graves.

When Margaret found the woman’s mother alive and well, living less than 25 miles away from Nottingham, she knew there was something wrong. Why would social services lie about a thing like that? Why had mother and daughter been separated and left in the dark for so long? And if this was just some terrible clerical error, what about all the other children on the boat?

What Margaret uncovered over the next two years was that the woman had been one of thousands of vulnerable children lied to and forcefully deported from Britain in the post-War period, to the former colonies of Australia, Canada, New Zealand and Rhodesia. Even worse, this was part of a systematic government-approved programme of betrayal, institutional abuse, colonial callousness, racism and deceit.

The letter she had received in 1986 was just the first in a vast paper trail of thousands of human stories. Stories of impoverished families torn apart; parents and children, brothers and sisters. Stories of crammed dormitories full of children crying themselves to sleep on mattresses soaked with their own urine. Stories of forced labour meted out with punishment beatings and humiliations. And stories of sexual abuse by priests and so-called carers.

Kids that weren’t old enough to cross the road on their own were suddenly on the boat to the other side of the world, told their mothers and fathers were dead

The policy of deporting children dated back to the seventeenth century, as long as Britain has had an Empire. But these were not remote stories from ancient history – the practice had been resumed in 1947, and had been going on as late as the 1970s.

The apparent explanations for it don’t offer any comfort. The unfathomable truth that emerged, and what historical documents now confirm was that the children were shipped out to the colonies, ultimately, for their ethnic stock.

As natural migration to Australia from surrounding Asian countries increased, the white inhabitants developed a theory. If this continued, the whites would soon be the minority. It was called the “yellow peril,” though today we can rightly call it what it was: white supremacy.

The Australian Government’s solution was to tap into sources of “good white British stock” to keep the undesirables at bay. And a willing British Government, along with pillars of the establishment including the Church of England, the Catholic Church, even children’s charity Barnardo’s, were happy to comply.

Addressing a group of British children who had just stepped off the boat in Australia in 1938, a grateful Bishop of Perth said: “If we do not supply from our own stock, we are leaving ourselves all the more exposed to the menace of the teeming millions of our neighbouring Asiatic races.”

As many as 150,000 vulnerable children were taken from care homes and charities and trafficked in the nineteenth and twentieth centuries, the majority in the pre-war period going to Canada. Between 1947 and 1970, some 3,000 vulnerable British children were effectively kidnapped from orphanages and care homes and sent to Australia with the promise of happy lives riding to school on horseback and picking oranges in the sunshine.

Margaret Humphreys established the Child Migrants Trust in 1987 in West Bridgford, when the true scale of the scandal began to emerge and it was clear that serious, coordinated action was needed. Surrounded by the photographs that cover every wall of her office – grainy black and white pictures of groups of children huddled by the gangways of ships, and newer, colour photos of the adults they became – she tells me the story that has gripped her for over thirty years.

“Kids that weren’t old enough to cross the road on their own were suddenly on the boat to the other side of the world, told their mothers and fathers were dead, boys told that they were the sons of whores. And many were abused, more or less, from the day of arrival.”

Over the past thirty years, she has worked unremittingly to expose the truth behind the deception, support the thousands of victims who have come forward, and where humanly possible, to reunite the families torn apart decades ago.

Numerous TV shows and dramatisations have come out since the ground-breaking Lost Children of the Empire documentary first aired in 1989; books have been written, including Margaret’s own famous memoir, Empty Cradles; and in 2011 the story was made into a major internationally-acclaimed movie, Oranges and Sunshine.

Much of the campaigning has been centred on persuading unwilling British and Australian governments to pay attention, let alone apologise. And in 2010, in what Margaret describes as a “turning point” moment, an official apology did come from Prime Minister Gordon Brown, who praised the Child Migrants Trust as “a voice for many who were so long unheard”.

That apology led to the establishment of a £6 million Family Restoration Fund to enable child migrants to search for their loved ones. It set into motion the inclusion of the child migrants scandal into the wider Independent Inquiry into Child Sexual Abuse (IICSA), and similar inquiries over in Australia. And later that year, Margaret received an CBE for her life’s struggle.

But there is still much to do. Despite numerous inquiries and Royal Commissions, there has never been an official judicial inquiry with the powers to summon people and institutions to answer questions. There is some hope: Labour’s Lisa Nandy and Jackie Doyle-Price, Conservative junior minister in the Department of Health, have taken up the fight for an inquiry, though this is currently clouded by the political chaos of Brexit.

Since 2010, over 1,000 families have been reunited, many from Nottingham where Margaret’s investigations began. It is in this city that she is campaigning to have a major national memorial established for the many victims and family members who visit Nottingham each year, in thanks for the work the trust has done.

And it’s here she says that there should be more recognition for the support she received, right from the start, from the County Council. Thanks to former head of Nottinghamshire Social Services Joan Taylor, who now chairs the Child Migrants Trust, and former leader of the council Sir Dennis Pettitt. “They were the only people that came forward at that point with any conscience,” she says. “At first they funded me for a year, and that went on for fifteen years.”

In thirty years of fighting for justice Margaret has enabled, and witnessed, many extraordinary reunions. She will always remember the moment a mother and her son were brought back together in the early nineties. By then he was a man; she was an older woman, and they had each been through so much.

The last time she had seen her son was through a cloud of steam and smoke at Lime Street station, a desperate helpless mother, standing alone on the platform. It had been over forty years since they were wrenched apart. Finally her little boy had come back.