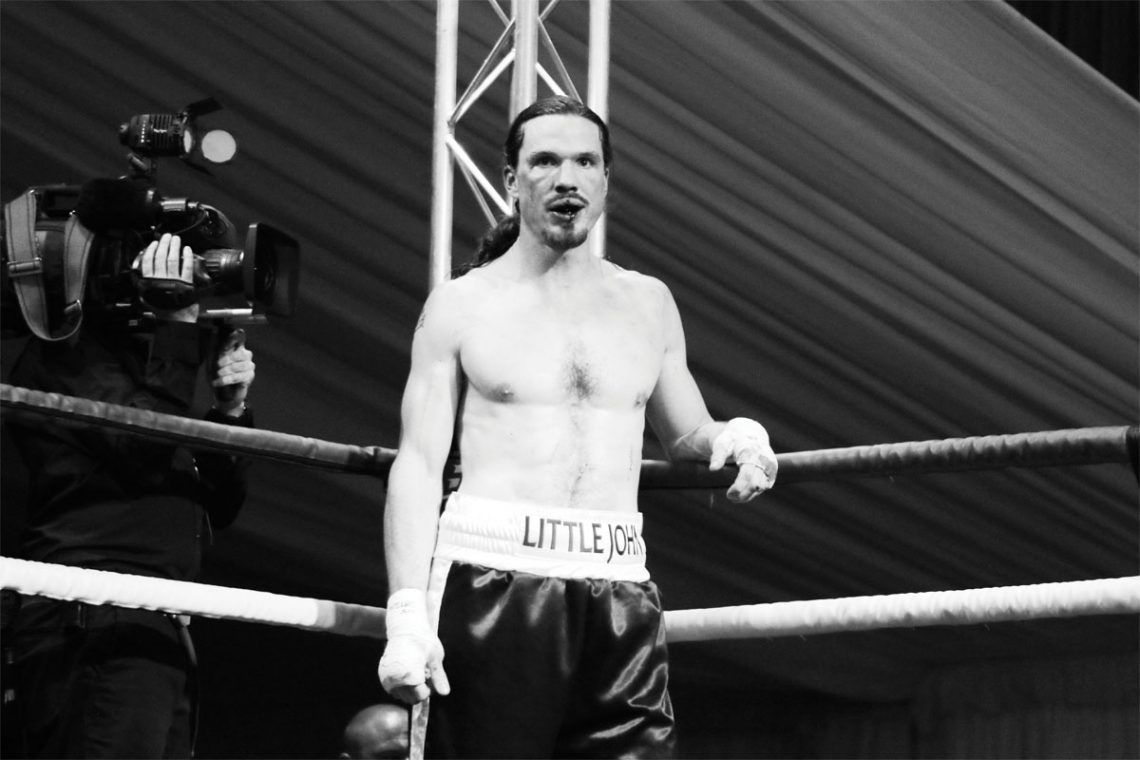 When Pete Radford arrived backstage for the closing night of Romeo and Juliet, the first thing the director noticed was the state her actor was in. His lip was split in two from front to back; he had a shiner under his right eye, a graze under his left eye, his cheeks were still swollen and he bore the unmistakable pallor of a man who’s been in a scrap…

“She wasn’t too impressed,” admits Pete. “She suggested I use some concealer.”

There wasn’t a lot of concealer being handed out the last time I’d seen Pete, backstage at a very different venue on a very different night. The shabby dressing room was crammed with knuckle-taped hard-nuts and the whiff of adrenal tension. Stocky bodies paced the room, exhaling sharply, while some sat, manspreading on the wooden slatted benches, staring into space, and others mirror-boxed, glaring at themselves, fists flying, accompanied by that “geeesh-geeesh-geeesh” sound, three feet away from a toilet cubicle in heavy, audible use.

In among all that, I found the 6’5 figure of Pete getting his knuckles taped up, looking composed if a little wide-eyed. It was fight night at the Connexions Leisure Centre outside Coventry, and Pete “Little John” Radford was on the billing.

He’s a man of many parts. He plays the legendary merry man in the same cast as Ade Andrews, aka Ezekial Bone, Nottingham’s most popular Robin Hood tour guide. Pete is an actor, occasional Deliveroo rider, Greenpeace member, transitioning vegetarian, and a rising star on the bare-knuckle boxing scene.

Two years ago, he and Ade performed at an event organised by BKB, the league he now fights in. The show had come to Nottingham and they wanted to bring in a bit of local flavour; cue a Robin Hood spectacular. They could have left after their show, but Pete was gripped. He stayed and watched all the fights, and – as you do – decided that he wanted to give it a go.

“They didn’t have many professionals attached to it back then,” a bruised Pete tells me after the fight. “They had fighting men and a lot of the fights were scrappy. I thought I could handle myself better than some of them.”

He certainly isn’t short in the guts department: at that point he’d only had “a handful of boxing lessons” in his teens, but had never been in the ring. He got in touch with the organisation and pestered them for a chance to fight. A fight he finally got in April 2016, and won.

Since then he’s made a name for himself in this intriguing underworld. Something of a modern-day Bendigo, he’s putting Nottingham on a very unusual map.

I don’t mind admitting that I was questioning my ability to stomach a whole night of this. I’d never even watched a gloved boxing fight before.

The venue was in a deeply unromantic part of outer Coventry. Turning into the car park off a dark lane, a procession of taxis, minibuses and enormous four-by-fours with personalised plates offloaded huge men with thick necks in three-piece suits, tracksuited lads with tattoos creeping out of the top of their t-shirts, glamorous girls squeezed into push-up bras, sequined skirts and precarious heels. If there were awards ceremonies for door staff, this is how they might look.

The thought that this might be a little gory was well founded. The first fight I watched was called off after about twenty seconds because one of the fighters had been hit in the mouth so hard that his teeth had gone clean through the flesh under his lower lip. I can still hear the noise it made; a sort of sharp crack accompanied by a wet, bloody thud.

Even the niggly fights created some pretty dreadful noises. If it wasn’t the piercing snap of knuckles cracking into jaw or eye socket, it was the soggy pounding of fist on sweaty torso. With every clean crack, especially to the face, a grim wave of energy ricocheted through the baying crowd.

Somewhere behind me, a gold-chain-wearing wideboy in a colourfully thrown-together suit occasionally chipped in with, “Spark ‘im muvva f**cka!” or “Cam on, F**KIN’ ‘IT ‘IM!!”

One of the worst injuries of the night was to Pete himself. Maybe thirty seconds into his fight, he took an absolutely sickening blow to the mouth, which completely cleaved his top lip in two, from front to back. For the rest of the bout, Pete was clearly in pain; his face puffed up straight away, his mouth dripping blood, with more punishment on the way.

But he can give as good as he gets and, encouraged by trainer Ian Buttle, he pulled it back to a draw. Not bad, given that he took what a lot of us would consider a week-off-work injury in the first thirty seconds of the fight.

Pete still seems rattled, and a little exacerbated with the experience when I join him and Ade for a debrief pint a week later. “It was the worst injury I’ve sustained,” he tells me. “I’ve had short-term brain damage where I’ve not recalled certain periods of time, but this is the worst.”

But he’s certainly not a quitter. He’s working on developing his techniques, learning from the fight in November, so he’s ready for next time. He trains in relative obscurity at the Fit II Fight boxing club in Ilkeston, fitting in sessions between rehearsals with Nottingham production company Much Ado About Theatre, run by Becky Clayden, among other acting gigs.

He’s appeared in plays, short films, music videos, and when he’s not doing that, he and Ade put on educational tours for school children in Sherwood Forest. (In 2014 Ade was doing a Robin Hood tour in the Lace Market when he spotted Pete on a bench in St Mary’s Church.)

Ade says that Pete’s fighting fits nicely with the “gentle giant warrior” figure of Little John, and a more modern Nottingham story. “This is really exciting for Nottingham,” he says. “It plugs into the tradition of Bendigo; here’s a guy doing this in the modern day.”

William “Bendigo” Thompson wasn’t a typical fighter either. The jeering, face-pulling somersaulting bare-knuckle bruiser has gone down in Nottingham legend, in the days when boxing could go on for seventy gruelling rounds.

In a very different era, the bare-knuckle boxing scene is reviving. And once again, Nottingham has a boy in the fight. Mainstream it isn’t – and I imagine that’s how many of its fans like it – but it’s on the way up, with the venues getting bigger and more high-profile. Pete’s currently preparing for his next bout, in Liverpool, in March, and I suspect he’d like a bit more of a Nottingham presence in the crowd after nearly two years of trying to drum up support.

If there is such a thing as a typical bare-knuckle boxer, Pete isn’t it. A fearsome fighter he might be, but he’s no scrapper. And while it’s a brutal business, fighting has helped him tame some personal demons. “It takes an interesting person to step into the ring and go into combat with another guy,” he says. “I used to be depressed. I was suicidal, but boxing helped to save me.”

This feature first appeared in LeftLion magazine in February 2018