One evening as I sat outside my hotel, slouching and sweating in the heat, a young Cambodian boy, Thoi, who I had given a few dollars to the day before suddenly arrived out of nowhere. Without any hesitation he repeated an offer from yesterday to visit his home and his family. I had awkwardly but politely declined it then, but this time, maybe just out of sheer curiosity, I decided to take him up on it.

As we scrabbled across the dust, dirt and rubbish piles away from the tourist village, I felt more than a little apprehensive. We clambered over a high concrete wall that separates the tourists from reality – him much more nimbly than me as clearly this is a sadly routine slog for him. As soon as we landed in the dirty dust on his side of the wall it was as though we had entered into a refugee town. 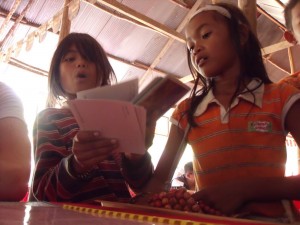 The neighbourhood was a shanty nothingness of grit and litter with flimsy wooden huts that stood on groaning stark planks suspended over the lake on stilts. As we trod the gangways of broken, bending and missing planks, me nervously pacing along watching every next step and the lake below, my Western presence was conspicuous to everyone around me in the slums.

Not so much nervous, but weak eyes followed me as I clumsily entered their world. Some of the faces managed tentative smiles, others looks of sheer bemusement.

We arrived at Thoi’s ‘house’, which was not much larger than a garden shed, a dark, dry and smoke-stained hut that housed, as far as I could tell eight people. 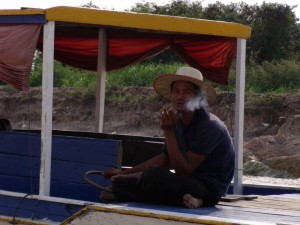 His family was nowhere to be seen, which for a dark moment made me entertain a dreadful thought, that there might be another reason we were alone. The rough walls were bare and over in the darkness there was a wooden bed-frame with a thin, mouldy mattress on top.

We sat cross-legged on the floor in the darkness, the only light coming from the door and the narrow gangway outside, where a crowd had gathered.

I sat and talked with my new friend, who has struggled so much already and has many more years of grinding a living ahead. We talked about his family, his mother’s illness and Cambodia’s conflict with Thailand, which is making what seems like an immoral, grasping claim to the Temples of Angkor, trying to cut off Cambodia’s only real life blood and proudest cultural jewel from its people. Cambodia has one main glory and without it the country will die. 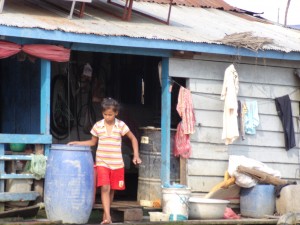 When I left I gave him another few dollars, hopefully enough to feed the hunger in them for maybe one day. After a kick about in the dust with a lovely, lively, happy group of boys I headed back over the tall hard wall to the tourist ghetto, emotionally numb.

Earlier that day I had visited the killing fields and S21. The fields themselves are not all that staggering, until you take a moment to imagine the thousands of Cambodians led to their deaths there. The innocents of all ages freighted to the camps to be slaughtered and slung into the hard earth like sacks of refuse along the same bleak roads now used by thousands of western tourists every year to visit the scene

Cambodia, unlike other more ‘civilised’ Western countries with genocide in their pasts, has had to face the trauma, brutality and shame of its recent past head on, in the glare of an invasive and unforgiving world. First the obliteration caused by the US invasion during the Vietnam war, and the evil of the Khmer Rouge that came in the vacuum it caused, have brought the country to its knees with the loss of an entire generation. 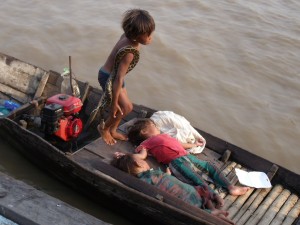 The poverty that followed has forced Cambodians to uncover their wounds well before they have healed and their abject desolation has led them to cash in on the tragedy. The morbid curiosity of the West and the dollars it brings are a crude quick-fix consolation prize.

Just like Thoi, Cambodia has a long, painful ordeal ahead, on the grit path away from its current desolation and horrific past. There is a futility among the lives existing in the piercing heat and the rotten dust, that when you try to digest it only leaves sickness and emptiness.

I left Phnom Penh drained and guilty about my own trip, one that’s been filled with bloated excess with a backdrop of so much hunger.